Remember What I Taught You and Don't Forget How to Behave 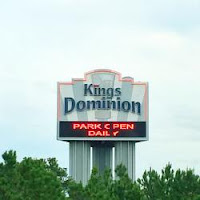 I remember when I was a kid the feeling I had when we were heading out on a trip to an amusement park like Kings Dominion. That anxious excitement did roller coaster loops in my stomach all the way there. As a young child, I never traveled very great distances, so a trip that was only a couple of hours seemed like it took forever. Not to mention, I had that same condition that most kids have; you know..are-we-there-yetitis.

But then as we approached the exit, I could see that big "Kings Dominion" sign from the highway, and I'd really be about to bubble over then. So dad would drive through the line to pay for parking; we'd cruise up and down the lanes to find as close a park as we could, all the while momma telling us not to forget which section we were parking in so we could find the car.

Dad would pull up, put the car in park, and make his obvious but glorious proclamation.."We're here!". My smile would be about to eat my face off. I was so ready to jump out that car.

But momma would momentarily pop our jubilant bubble by calming us down to give us ..The Talk. You know The Talk. Something like this. "Alright now, don't yall get in here and forget how to act; remember what I taught you and don't forget how to behave." To which we would reply in loathsome unison "Yeeesss Maam."

Press Pause on this story....now read this scripture passage.

"Never forget the day when you stood before the Lord your God at Mount Sinai, where he told me, ‘Summon the people before me, and I will personally instruct them. Then they will learn to fear me as long as they live, and they will teach their children to fear me also.’ " Deuteronomy 4:10 (NLT)

See, what my momma was doing with us then is basically what the Lord was doing with His people here in Deuteronomy chapter 4. His chosen children, the nation of Israel, had been traveling for about 40 years making their way from Egypt to the Promised Land. And now here they are on the banks of the river about to cross over to claim that promise. But just before God sent them over, He had to have "The Talk" with them.

They needed "The Talk" because they were about to cross over to a place filled with new and different things. A place swarming with cultures that were foreign from their own, and none who knew anything about worshiping the true and living God. They needed to be reminded, and so do we.
Maybe you're about to embark on a new place in your life. A new job, new home, new marriage, new friends, new school, or just a new phase. Whatever it might be, let me remind you...Don't forget what God has taught you.