Try Not to Hit the Same Pothole Twice 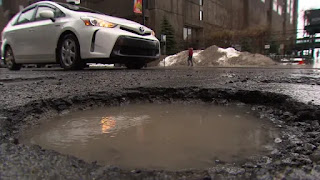 I want to share something with you that my dad shared with me.  For those of you who don't know him, at the time of this post he is 91 years old and my hero. He spent the earliest part of his life working in high-class hotels in downtown Washington DC. He started as a busboy and worked his way up to maitre d. That was all before I was born, so I always enjoy hearing stories of his time in DC and all the famous people he met back then.

Well, he once told me a story about when he first went there. He worried that he had made a bad decision. See, he was only 17, and he and my mother were newly married and had a child. He left them at home with my grandparents to try to find a way to support them. Not only was he worried about that decision, but other decisions as well.

He said he was talking to his boss at the time who had taken a liking to him. He was reflecting on his anxiety over what he felt were bad choices. He said his boss told him something that he never forgot. He told him that bad choices are like running over a pothole. You can't "unhit" it, and if you keep looking back at it, you're likely to hit the next one. So he told him to keep moving forward, learn from it and try not to hit the same one twice.

Now that is good advice isn't it? So good that my dad carried it with him for over 70 years. I am really glad that he shared it with his baby boy. (Yeah that's right; I'm still his baby; he even called me that recently). But really, we'd all do well to heed that wisdom. I know I needed to be reminded of it.

You and I both have decisions to make every day. Some trivial and insignificant; others important and life altering. I sometimes second guess both kinds. But I know that even if it's a bad decision, once it's made, I can't unmake it. Once the pothole is hit, I can't unhit it. So the best thing for me to do is learn from it, keep moving forward, and try not to hit the same one twice.

Jesus said it like this in Luke 9:62 "...No man, having put his hand to the plough, and looking back, is fit for the kingdom of God." That tells me that if we're going to go with God, we have to keep moving forward. I believe we can think back to remember what we've learned and how God helped us before. But we shouldn't look back. That's why the past is called the past; that's exactly where it belongs.

So let's pray for one another that we'd be able to let go of the potholes behind us and watch out for the ones in front of us. Then we can look ahead that we might be able to move ahead.
Posted by Rev. Eric Evans at 7:35 AM