Get Your Talking To 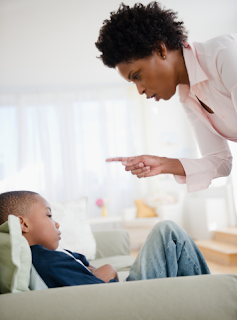 You ever gotten a spanking? I know that form of discipline is a dying practice, but for many of you reading this,  you grew up in an era where it was a more common thing. So except for you sweet lil darlins, most of you are acquanted with the feeling. And so am I.

Ya know, I'm not sure what was worse; the spanking itself, or the talking I kept getting after it. I mean the sting of those swats actually didn't last that long, but the talking I got from it lasted for days. Seemed like the least little thing would bring it back to my mom's memory, and she would say something to me or someone else about it. Like with one particular spanking, a few days after I got it, we were at my grandparent's house, and grandma asked me "How you been doing shug?". Before I could even answer, my mom jumped in and said something like "Let me tell you how he's been doing; do yoouuu know I had to whup him the other day for yada yada yada...". In my head I was screaming "Lawdamercy, here we go again!" Notice I said in my head. If it had made its way out my mouth, I would be posting another story about how I got whupped at grandma's house.

But you know what I'm saying right? I mean sometimes I had rather to have taken two spankings if I didn't have to hear all the talking about it. With the spanking I had to endure the short-term pain, but with the talking I had to face my long-term shame.

As a parent, I certainly understand why my mother did that. If it were left up to me, I would have immediately erased all memory of my wrong-doing , or maybe even tried to imagine I never did anything wrong to start with. And so, there might have been the chance that I would have made the same bad choice a second time. So, not only was the spanking necessary; but so was the talking.

You know, some people are put off by God's word for the same reason. In it we read a lot about what we shouldn't do wrong, or what we've already done wrong. The Lord uses the story of the nation of Israel for us to relate to as Christians, and the Old Testament is full of God giving them a stern talking. Just skim through the book of the prophets, and you'll see. And whether or not they wanted it, they surely needed it...just like us.

Think about it. God has the whole universe and everyone and everything in it to consider. Yet He cares enough for you and me to take the time to teach us, guide us, and yes even scold us. And the truth is, if He didn't care, He wouldn't do it. So when we ignore or reject God's word, we are ignoring and rejecting His love. Admit it, you know you need that talking. I admit that I do. It might not be good to us, but it's good for us.

The Apostle Paul wrote "All Scripture is inspired by God and is useful to teach us what is true and to make us realize what is wrong in our lives. It corrects us when we are wrong and teaches us to do what is right." 2 Timothy 3:16 (NLT).

So go ahead, find your Bible, open it up...and take your talking.
Posted by Rev. Eric Evans at 3:03 PM