No Arms....No Problem! (A Morning Prayer) 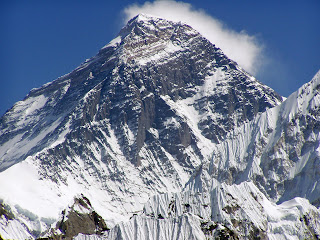 Good morning Lord. Thank You for another day. As the road ahead sometimes looks rough, I am reminded by that song which says "I don't believe You brought me this far to leave me". Thanks for being with me everyday.

Lord, sometimes I can get down in a mental rut and think I've got things pretty rough. But You often remind me..and humble me..by showing me others who have it much rougher and yet they still press on to do great things. I was reminded of that some time ago when I came across a story of a young man who climbed Mt. Everest...with no arms. I will repeat that..not for You but for me..he climbed Mt. Everest with no arms.

As I understand, he had to have both arms amputated after a tragic accident where the kite he was flying hit a power line. I can't speak for other people, but I know that if that happened to me, my greatest challenges in life would probably be figuring out how to hug my daughters or brushing my teeth. But this guy set out to not only be able to do those common, everyday things, but also...to climb Mt Everest.

Father, You know what a challenge climbing that mountain is, because You made the Himalayan mountains and its tallest peak Mt. Everest. You stretched it up to the sky over 29,000 ft, or over 5 miles in the air, making it the tallest mountain in the world.; You know that it's so high that it's thin air forces those brave enough to make it to the summit to carry oxygen tanks; and their mountaintop celebration can't last but so long because either air-deprivation or blizzards force them back down almost immediately. You have watched thousands attempt to reach its peak, and the hundreds who died trying. You have also watched the few hundred who made it to the top. But as far as I know, all of them had two arms to do it. That's why this man's accomplishment is so amazing. To do so much with so little.

I'm ready to do even greater things by Your power and my story if for Your glory.