Let There Be No Divisions in the Church! 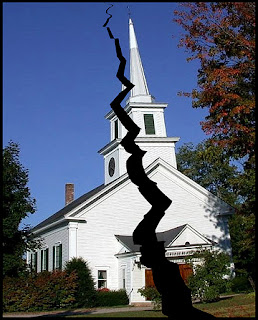 Member of a church? Regularly go to church? Then this post is for your consider

I believe the greatest threat to any local church is not an attack from the outside, but divisions on the inside. Bickering, arguments, and grudges can totally diminish a church’s effectiveness in accomplishing the mission that God has given us. If you've been a part of a church for any amount of time, it's likely you have witnessed it for yourself to some degree. It's nothing new. Since the earliest stages of the Church, internal divisions have been a problem. In fact, the Apostle Paul recognized it and warned against it in his letter to the church in Corinth.

So, how do we guard against divisions? There are several things I could suggest, but today I’ll share just one. Here it is....We need to make sure that we form our church bonds around what matters.

Think about the many reasons people will start a church or join a church. Some people come together around the leader. Some come together because of worship style. Some churches are held together because of family history. I’m sure you know some people who only join a church because that was momma’s church or great grand pappy helped to lay the corner stone. Now hear me, in and of themselves, there is certainly nothing wrong with those reasons for being a part of a church. But when they are the only reason, or the main reason, then that church is in jeopardy of divisions.

I mean, what do you do when the leader leaves or heaven forbid, dies? Some people will leave, while others will stay just to gripe up a host of complaints about the new one that comes in. What if your worship style does not offer enough variety to speak to the multiple generations and diversity you hope to have in your church? One group will fuss if you try to sing new songs, and another will fuss if you don't. What if your outreach actually reaches out, and people who have no connection to any of the families in your church start to show up. And what if they look nothing like you and act nothing like you? What then? The ones who hate change and expect the landscape of that church to always be like it was when they joined will find every opportunity to run down or push out the new folk.

I think we’d do well to look at the church in Corinth to which Paul was writing his letter. If we could climb into a time machine and go back to attend one of their church gatherings, we would be blown away. Some in fact might be offended, or at least terribly uncomfortable. You see, Corinth was at the center of trade in the Mediterranean Sea, and just about dead center in the Roman Empire. And because of that, it was marked by unusual diversity.

In that church, you would find Jews and Gentiles, the civilized and barbaric; rich and poor; light skin and dark skin; middle easterners, Europeans, Asians, Africans and everyone in between. So how in the world could people so different come together to have a meeting, much less form a church? I’ll tell you why. Because every time they came together as a church, they abandoned the many, many things they disagreed on to focus on the one they did….Jesus Christ and spreading His good news.

But even the Corinthian Church faced the internal threat of discord, as I’m sure your church and my church may face at times as well. But it doesn’t have to. Let me remind you to keep Christ at the center and make sure that your church matters are the things that matter to God. I believe Paul’s epistles are God’s letter to His church today. And let us who are a part of a church take heed to God’s words through Paul when he said in 1 Corinthians 1:10 “Let there be no divisions in the church. Rather, be of one mind, united in thought and purpose”.
Posted by Rev. Eric Evans at 7:40 PM