Looking at the World like Lot - A Morning Prayer 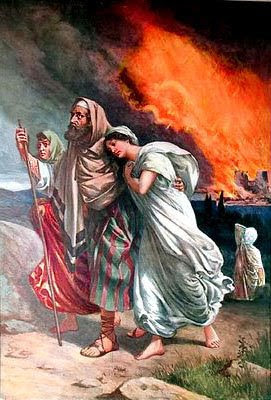 Good morning Lord. Thank You for another day. As You opened my natural eyes this morning to see this day, open my spiritual eyes to see what You would have me to do in it.

Father, I am troubled about the times we are living in, particularly for our country. All too often we hear about another violent act or mass killing. One of the most devastating hurricanes and flooding just hit Texas, and before the rain even stopped falling, scammers were already on the prowl. Where I'd thought our collective feelings about race had changed for the better, now it appears many were hiding how they really feel....and some aren't hiding it any more. We've got the most advanced medical system in the history of the world, yet still so many can't afford to go to the doctor or buy their medicine. The list could go on, but I'm depressing myself just typing this out.

Lord, with all of this swirling around in my head, I thought about Lot. I read in Genesis chapter 11 that when Abraham and his nephew Lot decided to part ways because the land they were living in could not support them both, Abraham allowed Lot to choose which land he would take. He could have taken the land to the left or the land to the right. Your word says that Lot looked out onto the plains of the Jordan and to the city of Sodom. He SAW that it was a well-watered, lush and beautiful land filled with the promise of prosperity. So that is what he chose. I can imagine all the hopes and dreams that he had for himself and his family that he was building on this new place where he was building his new life. Lot was living off the promises of the place, and not the provider of the place.

But Lord, the glitz of the city lights of Sodom never blinded You to what was really going on. You saw that it was a city full of sin. Today, Americans describe places like Las Vegas as "Sin City" almost like it is a badge of honor; they even market to tourists with that tag. But Lord, as it was in Sodom, so it is today that it is a serious matter. And so I read on about how wicked the city was, and how it almost consumed Lot. You eventually saved him, but You destroyed the city.

I can only imagine how differently Lot felt about that city on his way out of it from when he was on his way in. I can only imagine how his feelings for it changed from when it sparkled with the lights of lavish lifestyles, to when it glowed with flames of destruction. Once his eyes were opened, Lot's heart toward Sodom changed enough for him to say "Behold, thy servant hath found grace in thy sight, and thou hast magnified thy mercy, which thou hast shown by saving my life..". Sadly, the same is not true of his wife. Her heart still longed for Sodom, which was shown when she disobeyed You and looked back, and became a pillar of salt.

Lord, my prayer is that people in this country, especially those close to me and all my FB friends will turn their hearts away from this world and turn it towards You. How sad it is that so many see how sinful and destructive this world is, and yet in their hearts still long for what it has to offer. Lord, help us all to get past this world even while we are still living in it. You have a better place prepared for us who believe in Jesus. And I long to see Him there. I love You.