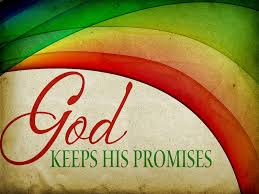 Here's a story I read that I'd like to share with you. It's a story of two young men, Harold and Mack, who served along side each other in Italy during World War II. One was from Illinois and the other California. Had they met in civilian life, they'd had no common interests and likely would have never been friends. But on the battle field, they became closer than brothers.

Mack started having a bad feeling that he wasn't going to make it out alive. So he gave Harold some mementos and said that if anything ever happened to him, to find his sister and give them to her. He also gave Harold permission to give her a kiss. Harold made a promise to Mack to fulfill his wish. One day later, Mack was killed in heavy artillery fire.

For over 50 years, Harold searched for Mack's sister. Every lead turned up empty, and every woman with the same name turned up to be the wrong woman. He could have given up, and it would have meant nothing to anyone else. But it meant everything to Harold. He had made a promise to his best friend, and it was a promise he intended to keep.

Finally with the help of his daughter, Harold located Mack's sister. They met at the veterans memorial in Marysville, California where Mack's name is inscribed in marble. Harold gave her all the items that Mack wanted his sister to have. Then he leaned over and gave her a kiss.

Proverbs 18:24 talks about a friend who sticks closer than a brother. That's referring to Jesus! John 15:13 says that there is no greater love than for a man to lay down his life for his friends. That's talking about Jesus! 1 Peter 3:9 reminds us that God is not slack when it comes to His promises. What He said He will do, He will do! That especially applies to Jesus! There might be things that you doubt, there might be things that you fear. But let your heart and mind find rest in the fact that God keeps His promises!

To all the veterans who may read this, I say thank you for your service! God's blessings and strength to you today and everyday. No matter what you have been through, I pray you are resting on the promises of God.