When Your Room to Run Has Run Out 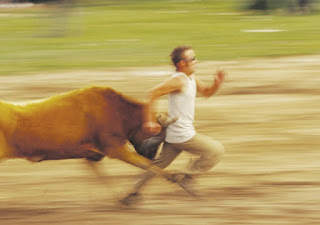 Once when I was about 12, I was helping my dad round up our cows because we were taking some of them to the market. The pasture was big and included both open land and wooded areas. Once we located where the cows were, we realized we had a good ways to lead them to get them to the corral. I wasn't scared to be out there in the open field with them, but I knew you had to be cautious, especially with the bulls.

Daddy told me to get behind and to one side of them, and he got on the other side. He instructed me to walk behind them slowly and make sure none turned out or turned back. Everything was going fine until this one young bull decided he wanted to turn out on my side. So I turned and trotted out to stay ahead of him to make sure he didn't get away from the group. He started to trot a little faster and so did I. We were basically running parallel with one another, looking like were in a race. Until...he obviously got fed up with me and turned to run straight at me. Well, I'm not sure if I can hang with running with the bulls like the Spaniards, but I am certain I can't hang with one running right towards me.

So I did a 180, dropped it in low, and put the pedal to the medal. I've never been fast anyway, but when you feel like life and limb are on the line, you'll surprise yourself, even while wearing coveralls and rubber boots. Even though I'm sure I set my own personal record that day, I could still hear his steps and snorts getting closer. I was looking for something to run behind, but between me and a few trees was a large thicket of briers. I was already bracing myself for how bad I would get torn up when I jumped in. Then I realized that he would probably jump in right behind me. So either bravery, logic or stupidity kicked in, and I turned around ready to face my pursuer (or meet my maker). I didn't know what else to do because my room to run had run out.

Ok now, here comes the figurative use of this story. You ever faced something you felt like you just couldn't face? You didn't know what else to do, so you decided not to face it, and you ran? You know we run in a lot of ways other than with our legs. Sometimes we run by ignoring things, avoiding things, even lying to ourselves about things. Sometimes these are problems that are no fault of our own. Sometimes they are matters of our own making.

Jacob in the bible was a runner too, both literally and figuratively. He had stolen the birthright from his brother Esau by tricking their dad Isaac. Esau was mad enough to kill him over it. So Jacob ran away. But there came a time that his room to run ran out. Not because Esau had caught up with him, though he was close. His room to run ran out because God caught up with him. While fleeing from his brother, Jacob found himself away from his family and alone one night after he crossed the Jabbok River. It was there that the Bible says "This left Jacob all alone in the camp, and a man came and wrestled with him until the dawn began to break." Genesis 32:24 (NLT). The man wrestling with Jacob was not his brother, it was God. That experience changed him for the rest of life, both physically and spiritually. Not only did he have to live with a limp from the wrestling, but his whole nature changed.

Sometimes, God works it out that our room to run runs out, not because He wants to back us into a corner to destroy us. He wants us to face our problems and give Him the chance to change us in the process. So ask yourself "Who or what am I running from?"; "What am I ignoring or avoiding?". What ever came to your mind, I hope that you see that running from a problem is not the same as fixing a problem. In fact, it could make it worse. So stop running; turn around and face it. And do so with the confidence of knowing that if you are a follower of Christ, you will never have to face it alone. Amen!

Oh, what happened with the bull chasing me? Oh yeah, when I finally got the nerve to stop running and turn around to face him, I realized he had gotten tired of fooling with me a long ways back. He had already turned around and went back to the herd. I think what I thought was him running behind me was the sound of my own heart beating and my panicky breathing. :)
Posted by Rev. Eric Evans at 6:34 AM