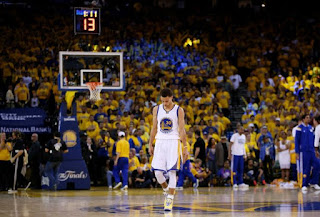 Good morning Lord. I thank You for another day. I am so glad that Your mercies are made new everyday, because I need them.
Lord, I was watching a documentary on the sport of basketball that was very interesting to me. I wouldn't say that I am the biggest fan, but I am a fan, and I enjoy watching it. One thing in the documentary that jumped out at me was a surprising statistic on some of the greatest players; the field goal percentage. I was already aware that they track the ratio of the number of shots made to the number of shots attempted. What I didn't know was what seemed to me to be a surprisingly low field goal percentage for even the greatest players. I found out that most NBA players hover around 50%. Even the guy with the all time record, who I had never heard of, Artis Gilmore, had a career shooting percentage of just under 60%.
I guess that is so surprising to me Lord because I am so used to seeing the game highlights and watching those guys make impossible shots look so easy; shooting their way through a maze of defenders; popping jump shots with giant hands in their faces; making free throws with the crowds screaming at them. Then again, I guess only the makes and not the misses will find their way onto the highlight reels.
What that says to me Lord is that for these athletes to play at that level, for them to score a lot of points, for them to be great, they have get past their fear of missing a shot. I mean from these stats, just about any time they decide to take a shot, they have to know that there is about as much chance of them missing it as it is of them making it. Yet, they will take the shot anyway. If they miss it, they keep on playing, and if given the chance to shoot again, they give it another shot (pun intended). I suppose ultimately their hope is that by the end of the game, and then at the end of their careers, their makes will mean more than their misses.
Father, You obviously knew I needed to see that show because You had something You wanted to teach me. You know that sometimes when it comes to the things You call me to do, I can be slow to take the shot because I am afraid of missing. You know that even though I have faith in my heart, sometimes fear accumulates in my mind; and the thought of missing will keep me from shooting. I also know that spirit of fear is not of You. So Father, I will get back into the game today, and if You pass it to me, I'm gonna shoot it. I might make it or I might miss it, but I will shoot it. I just get this feeling that trying and failing, You can deal with. It's the failing to try that You can't much tolerate. So Lord, I'm gonna try.
I don't know what my stats are like Lord; only You are keeping those. I just pray that at the ultimate end of my game, my trying will outweigh my failing, and my makes will mean more than my misses. Lord, You are the best coach, because You love me even when I miss. I love You. In Jesus name. Amen.
Posted by Rev. Eric Evans at 5:44 AM