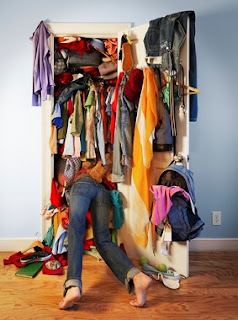 One morning, a couple of years ago, I opened my closet door in the house where we used to live to find utter chaos...ok more so than the usual utter chaos that hides behind there. See what had happened was the weight of clothes hanging on the rack and things stacked up on the shelf above it had caused some of the screws holding it to the wall to pull out. It had not completely fallen, but was hanging down and leaning over. So everything on the shelf up top started sliding off and onto the floor when I opened the door. I had lots of other things to do that day, and was hoping I could just close the door and forget about it for a while. But with all the stuff falling on the floor, I couldn't close the door. So no out of sight out of mind for that task.
To fix it, I had to first take all the stuff off the shelf that had not already fallen down and all the clothes off the racks. It was a closet I shared with my wife, and we had a lot of stuff hanging on there. But as much as we dreaded the job, we got to it. We got all the stuff off and out, I fixed the shelf, and hopefully sturdied it up a bit. Then we had to put all the stuff back in it.
As I was hanging my stuff back up, I quickly realized I wasn't going to be able to fit it all back in. Not sure how that works. Plus I had a couple new shirts I had recently bought and saw there was no way I could get them in there. So I realized it was the perfect time to purge some stuff. I needed to get rid of some old stuff and some not so old stuff that I just didn't wear,so that I could get my new stuff in there.(I tell ya, the struggles we have with stuff), But that's what I did. after that, it looked much neater.
In thinking about that, I see that life with God is like that sometimes. He is constantly trying to give me, show me, and teach me new things, but I have no room because I am too busy holding on to the old stuff. The Lord tells us in Isaiah 43:19 "Behold, I will do a new thing.."; In Lamantations 3:22-23 He says that His "Mercies are made new every morning.." In fact in 2 Corinthians 5:17 we are taught that if we are in Christ "We are a new creation; the old has gone and the new has come".
But how many of us don't have room for the new stuff God has for us because we won't let go of the old stuff. Old ways of thinking, old habits, old attitudes, old beliefs, old ideas, old places, old people (well..not like old, elderly...you know what I mean). But, why do we hold on to them? Often it's because we wrestle with questions like... What if they are still useful? Maybe they are to somebody, but not to you... How can I let go of the old when I haven't yet seen the new? That's why we live by faith. Trust God... But what if it's not enough? Hey...as long as you've got Jesus, you need nothing or no body else.
So I ask, when are you going to start cleaning out your closet?
Posted by Rev. Eric Evans at 6:00 AM