To Observe or to Participate 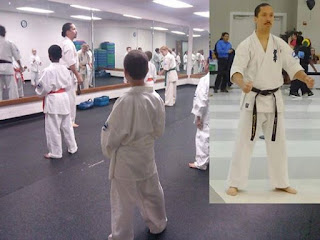 The people from my home community of Hollister know the name Kenny Buffaloe. He is a black belt in Kyokushin Karate. He has been studying it and teaching it for a long time. Now he has a son named Christian who is quite good at it and travels the world competing and winning. Well, I remember when I was about 12 or 13, Kenny was teaching a karate class at Hollister Elementary school, which is right down from where I grew up. Kenny had been to our school and done an exhibition which was really cool. Plus I had watched a few Bruce Lee movies by then, so my interests were peaked when I heard about it. So a few of my friends and I decided to go and check it out. We stood at the back of the class while Kenny was instructing. I remember him teaching the kids to count to 10 in Japanese as they were practicing their Katas. Ich, ni, san, shi, go...(can't remember the rest). Kenny is such a nice guy and really wanted to help the kids in our community, so he didn't seem to mind us standing in the back and not actually signing up for the class. We were all really getting into it, especially me. But...after a few classes and learning a few moves, we just stopped going. I guess we decided that being outside playing was better than being in there practicing. Sure, it was fun to see the class, but we didn't want to commit to being part of the class.
I'm still a fan of the martial arts, but all of my Bruce Lee posters are long gone, and I guess my dream of learning has too. But I wonder what if I had committed. What if instead of being an observer I had committed to being a participant. Wow, I can only imagine how many stripes I would have on my black belt. But...I guess it's ok. I suppose I really can't say I've had the need for Karate moves in my preaching ministry....but there were sometimes....(I digress).
You know thinking about that reminds me of some people I encounter in my Christian walk. Having been preaching for almost 16 years now, I have seen lots of people show up to church only to be casual observers. They seem to enjoy some parts of it. Some even show through their expressions or their comments that they have a desire to go deeper with God. So I will see them show up for a few Sundays, and I start to get all excited for them. Then, another Sunday rolls around and they don't show. And then another, and another. I pray that perhaps they are just going somewhere else, which is all good because it's God's kingdom and not mine. But many times I know that not to be the case. My heart is burdened by that, and I wonder why. Is it like when I was a boy, and play seems more appealing than practice? Is it hard to commit because they are so committed to other things?
I'm not sure what it is. But I will say this. If you are reading this and find yourself "standing in the back of the class", I encourage you to sign-up and get committed. God can take you a long way with Him, but you can't be half in and half out. If you want to go all the way, you have to be in all the way. I share this not to pass judgment, but because I care and I don't want you to get to the end of your life (which could always be closer than you expect) and wonder how different things would be if you had just committed to God.
Posted by Rev. Eric Evans at 5:33 AM No comments: