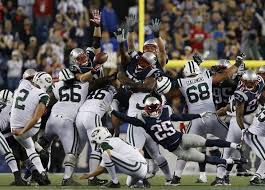 Over the last few years, I have grown to love watching football. I guess one of the reasons is because it's an escape. It has absolutely nothing to do with my responsibilities in life. But also I have developed a real respect for the players. I'm amazed not only by the athletic gift they have to do what they do on the field, but I am also impressed by the athletic intelligence it takes for them to play on the professional level.
A game I watched last year comes to mind between the Patriots and the Jets. I'm a Panthers fan, so I didn't have any emotions invested on either side to win. I was kind of pulling for the Jets, because I think the young quarterback starting at the time has potential, and I was afraid if they lost too many more they might bench him. He played pretty well that game. In fact he kept them in the game against one of the greatest quarterbacks of all time, Tom Brady.
It boiled down to one last field goal attempt by the Jets. The Patriots were only leading by 2, so a 3 pt field goal would have won it for them. Though it was from 58 yards, the Jets' kicker was capable of making it, and the Patriots knew it. The ball was snapped and set. The kicker took his couple of steps forward and kicked it with everything he ha. As soon as his foot hit the ball, the Jets on the sidelines were already jumping up to cheer for their win. But that's when the Patriots defensive tackle Chris Jones jumped off the line, raised both hands and swatted the ball right out of the sky. Boy, talk about taking the wind out of somebody's sail. The whole Jets team looked like they were hyperventilating in disbelief.
I was thinking about what it took for Chris Jones to be able to hit that ball when he had those big bodies blocking him. Not to mention that ball was firing off the kickers foot like a rocket. I believe it was his focus. He was able to tune out the crowd, look past the snarls of the offensive linemen, ignore any expectation they would lose the game, and concentrate on that ball. Now that is focus!
That blocked kick reminded me I need to be more focused too. Though I won't ever throw, catch or block an NFL football, I do have a job to do and a position to play. Except my field is the whole world, my game clock reads 'eternity', my goal is heaven, my opponent is my own sin and a team of spiritual forces, and satan is their quarterback. But I need God's help to move past my last play, whether it was a field goal or a fumble. I need to remember that no points have ever been gained by running in the wrong direction. My focus needs to not be on my past but on God's future. I need the Lord to help me clear my head and my heart and block out the noise of the crowd, whether they are cheering me on or booing me out. I want to be useful on the team called the Heavenly Saints, but I need to hear from God my coach to know what to do next. And I need to focus!
I ask that you focus on your own life for a minute. Have you joined the team? No, I don't mean have you joined the church. Have you joined the team? Everybody in the stadium is not on the team, just like everybody in church is not saved. Some are just spectators. If you haven't already, then you need to! We are winning and I don't want you to be left standing on the sideline with your head hung down. I want you to be in the end zone with me celebrating. But don't wait to decide. Just look around. The game clock is ticking down fast. Let's get focused!
Posted by Rev. Eric Evans at 6:23 AM