Hold Back the Hulk Inside 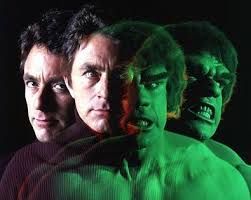 I was watching some of the movie The Avengers the other night with my family (notice I said "some", because I fell asleep in the middle of it). I was noticing how some of my favorite comic characters have been given a serious upgrade since when I watched them as a kid. Especially the Incredible Hulk.
I remember as a boy watching the live action series on the Hulk. In fact I saw that version before I ever saw the cartoon or comic book version of him. At first I was afraid to watch it because even the end of intro of the show has this green monster standing in the dark with lightning flashing behind him as he raged in the rain. But I watched it anyway. Even though it was a simpler version compared to today's high tech adaptation, Bill Bixby's portrayal of David Banner and Lou Ferrigno's green body painted portrayal of the Hulk drew me in week after week. The thing to watch was what would it be that would take David Banner over the emotional edge and bring out the Hulk.
I can't relate to what's it's like to be a wondering man with nothing but a stolen set of clothes, a duffel bag and the determination to find a way to reverse the effects of the gamma rays. Nor can I relate to being a Mr. Olympia level raging green beast whose anger will cause him to burst out of all his clothes (except for his pants). But I think I can relate to the person that stood between the two.
See, I know how it is to feel like you have a person locked up inside of you that you never want anyone to see, and yet it wouldn't take much to cause him to break out. I know how it feels when it seems like the person you don't want to be is about to take over the person you had hoped to be. I know how it feels to know what the bible says and how it says we are to think, talk and act, and yet our emotions, whether anger or sadness or hate or frustration or defeat or hopelessness or jealousy or pride or all of them at the same time...they drive you to want to toss all that word right out the window. I know I am to put on the whole armor of God, but sometimes I feel like doing a Hulk and ripping it all off. So I have to pray to God for help, and this is what I pray...
I know that as long as I am breathing on this side of Heaven, and I am living in what God's Word calls the flesh, I will have to keep on fighting back this Hulk of feelings that live inside of me. My prayer is that the Lord will help me so that he won't win. I need God's help so he don't cause me to make long-term decisions based on short-term emotions. I need God to keep him from breaking out and causing me to say or do things that I will have to clean up later. I ask God to not let the person I don't want to be take over the person I had hoped to be.
I pray to God for that because though I'm not strong enough, He is more than able to hold back the hulk inside.
Posted by Rev. Eric Evans at 6:21 AM