Don't Throw Away the Whole Apple 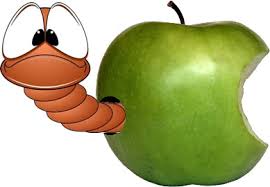 Two apples sitting on the counter in our kitchen caught my attention. They have been there for a few days, and I was thinking that I need to go ahead and eat them before they go bad. I love apples and should eat more of them. I think I got my taste for apples from my dad. Growing up, he was always buying apples; even had apple trees in our yard. He liked to peel his before he ate them. I loved to watch him pull out his pocket knife and attempt the cut the peel off, starting at the top then all the way down in one piece without it breaking. Often he could, and I was really impressed. Then he would cut a big piece off and give it to me.
When it was one of the apples off the trees in our yard or on the farm, when he cut it, he would inspect it before he gave it to me. He was making sure it didn't have a worm in it. Sometimes I thought he was being too cautious because the apple would look perfect on the outside, no sign of a worm hole or a soft spot. But he told me that sometimes even the prettiest of apples could still have a worm in it. So I would look at an unpeeled apple and try to figure out how could a worm sneak in without leaving a trace. Daddy explained to me that there were certain types of flies and moths that would lay their eggs on the apple bud just when it was barely sprouted out from the branches, and as the bud grew into an apple, the egg would be already growing inside. Once that egg turned into a worm-like larvae, it would start eating the apple from the inside out.
I must say that is pretty ingenious for God to give that wisdom to those insects. But it can make for a bad experience for me with an apple. There is a joke I heard a long time ago that goes..'What's worse than finding a worm in your apple?..finding half a worm'. Perhaps worse than that is biting into an apple, seeing where the worm has been, but finding not worm at all. That has happened to me, and to this day I am reluctant to eat apples right off the tree.
Sometimes I see my own and other people's experience with church sort of like biting into those apples. I have been a member of 3 different churches. I have visited too many to count. I have had the perspective from the back pew to the pulpit and everywhere in between. And in my life, I have witnessed people catch their first view of church; often looking at it like a shiny red apple. There is something about it that appeals to them as they view it from the outside. Maybe it's the building, or the fellowship, or the prayer, or the music, or the preaching, or the members, or whatever it is. But it looks appealing to them. So they decide to take a bite, whether that be they come for the first time, or come back for the umteenth time, or may they decide to join or to sign up to serve in some way in the church. But then as they bite deeper, they stay longer, or they work harder, at some point they encounter a worm.
It could be a small worm like maybe a negative comment, or a small disagreement, or it could be a really big worm like false teaching creeping into the pulpit or a leader in the church being exposed on some horrible sin. Whatever it may be, I have seen people bite that apple to reveal a worm and so they decide to throw the apple away. They stop growing, they stop serving, or even they stop going.
My prayer is that God will remind me and others who've had experiences with worms that He gave us His perfect Word to learn and His perfect Son to follow with His perfect Spirit to guide us. And that He have given us this to be done in a local body of believers, we call the church, which is filled with imperfect people...including me. We are all born with the worm of sin already within us, and our struggle TOGETHER is to seek God so it won't eat us from the inside out. We need to be reminded that an occasional worm is not worth throwing away the whole apple.