Strong Enough to Pull Me Out 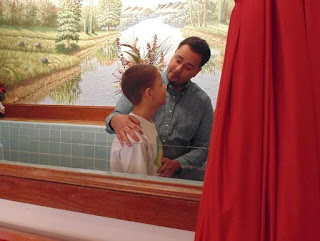 I am grateful that yet again I had the privilege of baptizing another one of God's precious souls this past Sunday. It is such a wonderful event to even witness, and I can hardly believe that I get to actually perform it.
It takes me back to the first time I got baptized. I remember it like it was yesterday, or maybe at least like last week. But, I remember being scared to death. I couldn't swim and the thought of being taken under the water at the hands of another brought about a lot of anxiety. I was glad that our church had recently built a baptismal. Before then people were baptized in a pond. Now that would have been really scary.
My pastor at the time was Rev. T. Brayboy, and he was a man who looked like he was well capable of hanging on to my frail frame. But I was still scared. Even though the baptismal couldn't have been filled with more than 4 feet of water, and Pastor Brayboy was going to be right there with me, I was scared I would drown, or worse...I would take in a nose full of water and come up choking and shooting water out my nose to my embarrassment.
But, there were too many people watching, and too many people to disappoint, so I headed on towards the pool. I realized that morning that I was the first in line to be baptized in this new pool. So my nerves were somewhat calmed by the sense of pride I felt. But I also realized something else...I made a very poor choice in the socks I wore. I had on thin, black dress socks that turned out to be very slippery in that pool. So when Pastor Brayboy leaned me back to baptize me, both of my feet shot right out from under me. Lord You say in Your word that pride goes before the fall, which I found to be literally true that day.
In that moment that I went under, I was thinking that my worse fears were actually coming to pass. I took in a nose and mouth full of water, and I felt like I was drowning. Of course in my mind it seemed like I was under for an eternity, which was probably only 2 seconds. In my split second moment of terror, fear caused me to question whether or not Pastor Brayboy would be able to pull me back up. The more of the fractions of those seconds passed, the less that I thought that he could. Well, of course he could and he did, which my being here typing this post bears witness.
Now that my spiritual eyes are open wider, I can see that what happened on that day is a picture of what God has done for me. There was a time that I was drowning in sin; whether I look at it as I slipped into it, I jumped into it, or Adam and Eve pushed me into it. Either way I was deep in it. And the longer I was in it, the more I questioned whether I could crawl out or anyone could pull me out. But then on that day in 1997, through the murky waters of my wayward life, I could see God's hand reaching down to me. To be honest, I felt like God was close enough for me to reach, but I wasn't sure if He was strong enough to pull me out. But I didn't want to die with the way my life was, and I felt like if He loved me enough come down from His throne to save me, then I should at least try. And of course, I did..and He could..which my being here typing this post bears witness.
Posted by Rev. Eric Evans at 6:07 AM