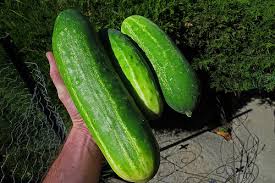 Some time back I was in line at Subway watching and waiting as my sandwich was being made, and the sliced, peel-on cucumbers caught my attention. I know they have been offering that for a while as a topping, but seems a little weird to me to have a raw cucumber on a sub sandwich. Pickles...ok, but cucumber...I don't care for it. But, it's all in what you're used to I guess.
But, I was noticing how big those slices were, and thought they must have come from a huge cucumber. And Lord knows, my one thought can lead to many others in a matter of seconds. See, that made me think about when I was little, my dad used to plant cucumbers on the farm. And I don't mean a few vines in the garden for the dinner salad; I mean an acre or two to pick and take to the market. Back then, there were a lot of people around where I live who did that and a lot of people who picked cucumbers in the summer. I guess my generation may have been the last. If I told my girls we were going to pick cucumbers, they would probably ask at which grocery store.
I suppose child labor laws didn't apply in the rural south because some of my earliest childhood memories were in the field picking cucumbers. In fact I remember being barely big enough to carry the empty bucket out in the field, but once I picked it even half full, my dad had to carry it back for me. But I also remembered it to be fun, not like work, because the whole family was out there, and we would laugh and joke while picking. It was a like treasure hunt for me; turning over the leaves to find that green gold.
But one thing I had to learn was that there is a funny rule about the size of cucumbers that seemed odd at first. I thought, the bigger the better. So I went out hunting around for the biggest cucumbers I could find. So when we got to the market, and my bag of cukes were unloaded into the machine that sorted them into bushel baskets by size, a lot of mine went past the #1's, and #2's, and fell into the basket marked #3, and then one last basket that wasn't labeled. In fact most of mine ended up in that last basket. I was excited thinking I had found more of the best cucumbers over everyone else. But my smile fell to a frown when I was told that the last basket was for the rejects, and those would be thrown away. It was explained to me that the real big ones start to lose their taste and are too big to be used for pickles. Needless to say, I was disgusted. But I also felt bad for those cucumbers...those rejects.
That made me think about how this world has preset standards for what it accepts as being good and worthy and valuable and beautiful. And anything or anyone who does not fall into one of those baskets is cast out as a reject. I think about over the years all the people who have been dropped into the reject basket...the girls whose weight exceeds what's accepted as the norm, the boys who aren't athletic or cool, the people whose skin wasn't the right color, the families who couldn't afford the nice house, the people sick with a disease those around them didn't understand, the people who live for God, and even God's Son who died for them.
I ask God to forgive me if I have ever..even just in my thoughts...have ever rejected anyone because they didn't meet my standards of what's good and acceptable. And thank the Lord for always being better than any friend, especially during the times I have felt like a reject. I pray that anyone reading this who is feeling like the cucumbers in that last basket will come to know and believe in what Jesus said in John 6:37 "Those the Father has given me will come to me, and I will never reject them".