Getting Ready for My Giant 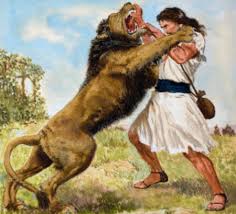 I know that because of some of the tough things I have been facing lately, God brought to my mind the story of David and Goliath. Well, actually a story that leads up to the story of David and Goliath. I was thinking about how David, as a young man, was standing in the valley of Elah looking up at this 9 foot giant who was intent on killing him. As David was looking at the glare off Goliath's sword and the evil in his eyes, he recalled his own story of an earlier victory. He thought back to when he was tending to his father's sheep, and a lion and a bear tried to attack. As far as I can tell they weren't at the same time, but I'm not sure how far apart they were. But he said that he killed both of them with his bare hands. Wow, that is amazing! It if were not in God's Word, I probably wouldn't believe it.

I would guess that at the time that happened with the lion and the bear, David probably thought that was the hardest thing he would ever go through in life. But as he stood facing the giant, I believe he was retelling that story, not just so the giant would know who's God he was messing with, but I also believe he was reliving that moment as a reminder to himself that he.. was.. prepared! I understand now what David understood then that his fight with the lion and the bear was not to be his greatest story of triumph; it served as preparation for his future giant. He didn't realize at the time, because he didn't know there would be a giant...but God did. And God knew David needed to be prepared for him, or else Goliath would have destroyed him probably faster than the lion or the bear ever would.
I thank God for reminding me that the lions and the bears that I face now are not purposed to destroy me, nor will they ever by my final triumph. They only serve as my preparation, my training ground for the giants I will face in my future. So I ask God to forgive me for grumbling and complaining and questioning all these lions and bears. In stead I should thank Him for loving me enough to get me ready for my giants. So Lord...thank You! Thank You for getting me ready for my giant!