The Snake in the Garden 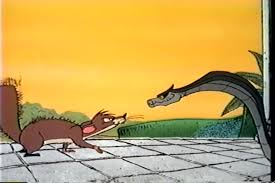 I was recently reminded of a story from my childhood. It's the story 'Rikki Tikki Tavi', which I had seen the animated version of it on tv when I was probably 5 or 6. I was captivated by the story when I first watched it.
The story is about an English family who moved near the jungles of India. As they were fixing up the house that had been abandoned for many years, they came across a mongoose, which they decided to keep as a pet. Good thing they did, because there were two cobras living in the garden who posed a great threat, and God created the mongoose to specialize in snake killing. Well, the cobras decided they needed to do away with the human family so they could once again reign over the garden and house, and they needed to do it before their brood of eggs hatched.
So the male snake waits in the bathroom to kill the father, but Rikki slips in and kills him. Then finally the climactic scene at the end is where the female cobra, driven by rage and revenge, sits coiled and ready to strike the little boy. The snake's threat to the family was "If you move, I will strike the boy...if you do not move, I will strike the boy". I remember thinking "What kind of option is that?'. But anyway, Rikki Tikki is able to lure the snake away from the family as he holds the last of the snake eggs in his mouth (he had smashed all the others), and threatens to destroy it. The snake gives chase and the pursuit ends up back in the snake hole. After a few tense minutes of waiting, Rikki Tikki finally emerges from the hole victorious, having killed the snake.
That was a great story for me to watch and read as a kid, and I think the Lord brought it back to my memory as an adult because He wants me to be reminded of some spiritual truths. In God's word He teaches me that my main spiritual adversary, the devil, came first as a serpent, which was the most cunning beast of the field. And not only was he after Adam and Eve, he is still out seeking to "steal, kill and destroy" today (John 10:10). And though I cannot see him, I know he is lurking in the shadows waiting for his opportunity to strike. And just like the family in the story, the enemy was no threat as long as I stayed away from the garden. But the closer I get to where God would have me to be, and where He intends for me to work, then he gets busy. But I won't worry, because I know I have a protector. Though the threat from that old serpent may draw near, I know it won't do me in. Jesus allowed Himself to be bruised on the Cross so that He could crush my enemy. And for that I am grateful.
Posted by Rev. Eric Evans at 11:52 AM