Reaching Past My Issues 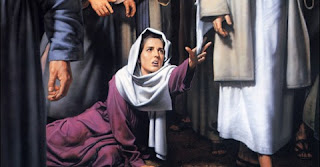 Issues....issues, issues, issues. There's always some issues. Issues in the world, at work and at home. Issues that last for a little while, issues that last a lifetime. Everybody has issues, and of course I would much rather talk about theirs than mine. But I guess since mine are the only ones I am responsible for, then they should be the ones I take to God in prayer.
I read in God's word about a lady who had issues too; actually she had one issue that seemed to overshadow all the others. She had an issue of blood. I'm not sure exactly what that means, but it must have been pretty serious. In Luke chapter 8 it says that she had it for 12 years, and she spent all she had with doctors trying to get rid of it. But..she still had her issue. I would imagine having that issue for 12 years was something to go through. I mean, having an issue for 12 months is enough to make you want to throw your hands up; but after 12 years she probably felt like her life was then consumed and defined by her issue. In fact, in God's Word, her name is never mentioned; she is only known as the woman with the issue. I'm sure that after 12 years she felt like she was trapped and her issue was her cage.
I am really impressed by this lady. For most people, if they were trapped in that same cage, for the first few days, and weeks and even months, they would stand at the door waiting for someone to come and open it. Probably after 12 months they would maybe look at the door from time to time with hopes that there was still a chance someone would come and set them free from their issue. But after 12 years, they would likely forget there was even a door to be opened, and that issue would just simply become a way of life for them. Not only would others define them by that issue, they would begin to make it a part of how they defined themselves. Father, that's when people say things like, 'That's just how I am', or 'I've learned to live with it because some things just never change". ....But not that lady!
Not only did she never back away from the door of her issue prison, she never stopped reaching out through the bars. It's not recorded, but at first she probably reached out to family and friends, but they couldn't help her. Then she reached out to every doctor who would see her, but they couldn't help her either. Then she reached out to the Lord, literally. As Jesus was passing by, she pressed through the crowd and reached out to touch the hem of His garment. She never stopped reaching until she reached the One who could set her free.
That speaks to me because I have issues too. Sure, some of them last only a while, and as soon as get all worked up over them, they're already on their way out the door. But, there are some that have been around for a long time. Some even more than 12 years. And I have at times felt like I was trapped inside my issue. Before I got saved, I thought I had no choice but to make myself satisfied inside that cage. But since I met the Lord, I know there's always hope for change. So no matter how many issues I have to reach through, I will always keep reaching for Jesus.
My believing is my reaching. I believe God can change me, and I believe just one touch is all I need.So I will keep reaching past my issues.