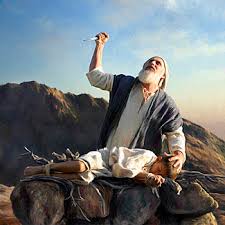 I was thinking about the story of Abraham and his son Isaac. I can see why God moved so mightily through Abraham's life because his faith was so strong. I was already impressed when the Lord told him to leave his home and just start walking and then later He would tell him where he was to go. That took a tremendous amount of faith. But then later God told him to take his own son, the son of promise that he had been waiting for so long, up on a mountain and to sacrifice him. I don't think I could have even looked in the direction of that mountain, much less walked up it with my son to sacrifice him. But Abraham did, because he was ready not to just make a sacrifice FOR his son, many fathers would do that. But he was ready to make a sacrifice OF his son, and I don't know any who would. And he was prepared to do that to glorify God through his obedience.
That story came to mind just as I was sort of feeling a little down about some things in life I have sacrificed for my service to the Lord. I thought about the many personal ambitions and interests I have set aside so that I could pursue my kingdom calling. Sometimes I look around and see others with their hobbies and happenings and realize I can't do much of that because my life is consumed with the work God has put my hands to. Even family time is often limited and interrupted because of my responsibilities to the Father. As I was thinking about all of that, and just at the moment I was about to both give myself a hug and a pat on the back, God brought an image of Abraham and Isaac at the altar to my mind.
That made me realize that I am no more worthy of pity or praise than Isaac for the sacrifice I am making for God. I now see that like Isaac, the sacrifice was not my choosing. God has led me up to my own Mt. Moriah, He prepared the altar, and He have made ready His sacrifice. In fact, I can't even claim to be as noble as Isaac. At least he went willingly and without struggle. I have gone only with kicking and screaming and complaining most of the way up here. I can't even pretend to be credit worthy for choosing God and then making a conscious effort to give up my life for Him. The truth is, God chose me, and He led me out of the life I once lived. The only thing I ever really did was call on Jesus to save me, and even the Holy Spirit gave me the strength to do that.
I understand that I am God's sacrifice, and I am ok with it. God is so good to me that I would rather be His sacrifice on the altar of my life than an exalted king on a throne in this world any day. As the Apostle Paul said in Romans 12:1, I am willing to offer my life as a living sacrifice. I remember what the Lord has done, and I know what lies ahead. So I don't mind being like Isaac on the altar.
Posted by Rev. Eric Evans at 5:54 AM