Keep My Train on the Track 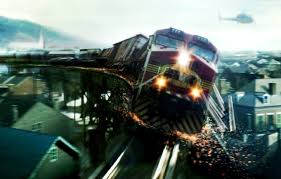 Recently I heard a colleague sharing with a group of us about his recent trip to Florida on a train. He spoke of how enjoyable it was, and that he'd taken one many times. That has got me thinking that I'd like to take a trip by train too. Not only does it seem like it would be a more relaxing and scenic way to travel, I'm guessing it may be safer too.
I don't hear about a train running off the tracks that often. That is a blessing because something that big, moving that fast, carrying that much stuff can cause serious damage. Makes me think about a movie I watched some time back called "Unstoppable". The whole movie was about the characters trying to keep this speeding training that had a stuck throttle and no breaks from running off the tracks and killing lots of people with the highly explosive cargo it was carrying. Needless to say, Denzel Washington figured it out. He always does.
I realize that life, my life.. could be like one of those trains. In some ways I see myself as the engine pulling a lot of cars behind me; my family, my church, job responsibilities, and many people who rely on me either directly or indirectly. Some cars are closer than others; some heavier than others. But they are all connected to me; they move with me, they stop with me, and if I did, they would run off the tracks with me. There have been times when I felt like I was going down hill with bad breaks and moving too fast. Things were getting away from me, and I feared I would derail. There were other times that I sat at the bottom of a high hill in life and didn't feel like I had the power move another inch, and I feared I would be pushed off the tracks. I know I carry around inside my own toxic, explosive issues that would destroy my life and the lives of others if I ran off the track. And I also know that even if small things caused me to run off the tracks just a little, where I sat halfway on and halfway off, halfway in God's kingdom, and halfway in the world, I would be doubly dangerous because not only will I not move forward, but I'll be blocking the tracks for all the other trains.
I think about these things, but I don't worry about them that much. I know that now God is driving this train. He built it, and He connected the cars, so I know He is the best one to conduct it. So, just as the Lord has been doing all my life, I know He will continue to keep my train on the track. When I go too fast, He will hit my breaks and when I go too slow, He will hit my throttle. He will Keep me on track so that through my life those connected to me will be blessed, and God will be glorified.
Posted by Rev. Eric Evans at 9:10 AM