Thanks for the Warning 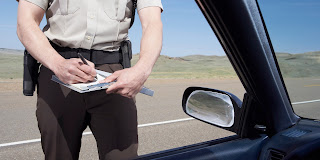 I saw a car pulled over by a policeman yesterday. I figured the person was well on their way to getting a speeding ticket. I haven't had one of those in a while. I try to make it a habit to slow it down, so I don't have to worry about that. But a few years ago, I broke my habit, was driving too fast, and got pulled over.
I was speeding on my way to work. Of course I didn't realize that I was speeding until I got close enough to the unmarked car to notice that it was an unmarked car. I guess that's the purpose of an unmarked car. As soon as my eyes locked on to his radar gun sitting on his dash board which was obviously locked on me, I looked down at my speedometer and saw that, yes I was speeding. It is amazing the amount of thoughts the mind can process in just seconds during a crisis. I thought, "Maybe he didn't notice; uh oh, he's hitting breaks; I hope he doesn't turn around; yep, he's turning around; I wonder if he's turning around for me; of course he's turning around for you, dummy, there's no one else on the road; I hope he doesn't give me a ticket; I wonder how much my insurance will go up". All of that in just about 3 seconds.
Well he pulled me. I actually didn't get all bent out of shape and mad. There was no one for me to get mad at but me. He was just doing his job. So, he asked the normal questions which included 'Did you realize you were speeding'. I actually didn't. Not because I am so obliviously innocent, but probably because back then I allowed myself to speed like that at times, and I had just gotten too used to it to notice. But long story short, after returning from his car, he gave me a warning ticket. A warning ticket. Thank God for the grace He showed me through that trooper, and thank God for that warning ticket!
Then the question was, what was I going to do with that warning? Just like in life I sometimes do wrong and I know it's wrong. I have been in this relationship with the Lord long enough that I am without excuse, I can no longer try to plead innocence by my ignorance. I either know it's wrong because I have read in God's word and it says it's wrong, or I can just feel it because of the Holy Spirit living in me tells me it's wrong. But, there are some things I do so often that I get to the point that I don't even notice that I am doing that wrong thing anymore. And it's those times that I am thankful that God cares enough for me to send me a warning. He sends me some sign, some message, some signal reminding me that what I am thinking, saying or doing is wrong, and I better stop it or face the consequences. Sometimes it comes from a passage I read in the Bible, or maybe a sermon I hear or even one I preach; sometimes it something on tv or the radio, or sometimes...a ticket. Sometimes it's trouble I see other people getting into, and I think "That could be me!".
I got a feeling that it probably doesn't upset God as much that I need a warning as it does when I don't heed a warning. I care about what the Lord thinks of me, so I am going to try to heed His warnings. But I will need His help to drive right and to live right. I thank God for loving me enough to warn me, and I want to show Him that I love Him enough to listen.