Thank God for Riding My Bumper 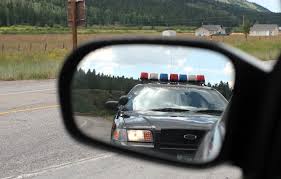 One morning I had a cop riding my bumper. I know what your're thinking...I wasn't speeding. I was riding behind a car on my way to work that was going pretty slow when I met the cop (I have learned not to complain about slow pokes because God has often put them in my path to keep me from getting a ticket). Even though it was an unmarked car, I knew it was state trooper. All the signs...Dodge Charger, extra electronic gadgets on the dash and rear window of the car, and that tale-tale whip-it-around-in-the-road maneuver.
Yep, as soon as he passed me, he whipped it around in the road and came right behind me. And of course, I got nervous. I wasn't doing anything wrong that I could tell, but I still got nervous. He followed pretty close behind me all the way for a long way. I kept looking in my rear-view waiting for his lights to come on. I mean that's what you expect when a cop whips it around in the road and follows behind you, right? But he never did. He just drove close behind me for miles. He finally turned off, and I finally breathed again.
Not sure why I felt that way, but I was almost upset over him following me. I mean to put me through that mental and emotional torture, and I not know why. But I do know one thing...the whole time he was behind me, I bet I was the most perfectest driver anywhere on highway 43 (poor grammar for emphasis). I was dead on the speed limit, stayed perfectly in the middle of my lane, kept the right distance between me and the car in front of me...I even think I had my hands at 10:00 and 2:00. So then I realized that maybe I shouldn't be upset with Mr State Trooper. Maybe I should thank him for forcing me to drive better and safer, at least while he was behind me. I guarantee that while he was back there, my statistical probability of having an accident decreased by double digit percentage points.
You know, we should see God in the same way. Of course we know that God is everywhere all the time and He sees everything we do. But there are times when it seems like we can "feel" Him watching more than at other times. Maybe when we're in church, or when we happen to be thinking of Him, or maybe when a preacher is around. (I know as a preacher myself, I have seen where I show up in some crowds and people stop cursing or hide their beers). But whatever causes us to "feel" God watching, we tend to straighten up and "drive right" when we do.
And for some, that is an uncomfortable feeling. Some even get a little perturbed with God because He's making us tense or taking away our fun. But we should try to have a better perspective on God. Just like that State Trooper wasn't hired to "get" me, but to make the roads safer for me and other drivers, in like manner God does not intend on "getting" us. No, He loves us and He simply wants us to have a safe, joy-filled life, and an eternity spent with Him. John 3:17 says it like this "For God sent not his Son into the world to condemn the world; but that the world through him might be saved." So He does not give us His commandments as rules to follow and then rides our bumper waiting for us to break em. No, He gives them to us for our benefit and our blessing.
So the next time God whips it around in the road on you, thank Him for caring enough to ride your bumper.
Posted by Rev. Eric Evans at 6:23 AM