Push in My Clutch 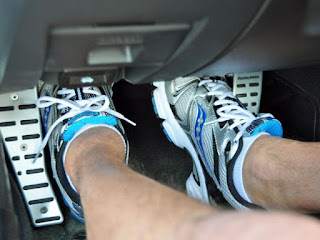 Sometimes it's hard to put into words what I'm feeling. I guess it's hard for me to understand what I am feeling, which makes it hard to say what I am feeling. That's why I am always using analogies and metaphors. It's my attempt to connect my heart to my head with a bridge of something I already understand. Like right now...I want to talk about how I am feeling about ...my feelings. For some reason, a car I used to own came to mind.
The second car I ever owned, which was the car that I drove the longest, was a Ford Escort, 1991 model. My dad helped me get it while I was in college because my first car, an Oldsmobile Cutlass Supreme (couldn't leave off the Supreme), was on it's last leg and not very dependable. Well, out of all the Escorts that were on the lot, I wanted a black one and a stick shift. At the time, I couldn't drive a stick all that well, but I wanted one. So after driving it for a little while and choking off a few times, I got the hang of the stick shift and really enjoyed driving it. I drove that car for 14 years, and I haven't owned a stick shift since that car. I kind of miss the shifting.
Well I thought particularly about how with that car I could mash in the clutch, pull the gear in neutral, and though the engine was running, the car was going nowhere. I could even race the engine, but as long as I had it out of gear, it was going nowhere. Thinking about that has helped me to say to God that I wake up and go through life everyday with all kinds of feelings. Some good feelings and some bad feelings. And if I am honest with God, sometimes they are feelings that don't make me much feel like living this Christian life or doing the things I know the Lord has called me to do. Sometimes they are passing feelings, but sometimes they are lingering feelings. Sometimes I feel like these feelings are trying to draw me away from God.
I believe the Heavenly Father made me think of that Escort so I would know how to ask Him this. I think as long as I am living, feelings are going to keep on turning over like the motor in that car. Like the pistons in that engine they will constantly go up and down, up and down. And I don't know if there is much I can do about it as long as I am living in this flesh. So I ask God...the God who is driving this car of my life, that when he sees me having those feelings that make me want to hit my turn signal and do a 3 point turn, I ask Him to please...please mash in my clutch and put me in neutral. Disengage my gears so that those feelings won't drive me away from Him and towards things He's been driving me away from for the last 17 years. Then when my feelings shift, and I feel called and I feel anointed, and I feel ready to do His will, He can pop that clutch, get me back on the road, and burn a tire or two with me if He likes.
I've been through too much to get this close to God to let my feelings drive me away now. And Jesus gave too much to be in my drivers seat for me to mess it up now. So I pray He will take my wheel because I trust Him. Until then....push in my clutch!
Posted by Rev. Eric Evans at 8:14 AM