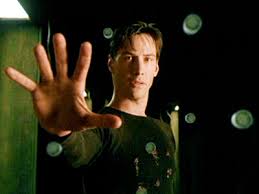 One of my favorite movies is The Matrix. I don't buy very many movies, because once I watch a movie, I usually don't want to watch it over and over again, but I bought that one. Of course I like it for the unique story line and the action, but I also really like that movie because in it I can see some spiritual metaphors that really speak to me.
In the climactic scene near the end to me is the best scene in the whole movie. The character Neo, who is believed to be 'The One' who came to set the people free from the Matrix, just got shot multiple times in the chest at close range. As he crouched dying on the floor with his adversary Agent Smith gloating over his demise, I had this feeling like all hope was lost (ok, I really get into the movies that I like). It seemed as though the so-called savior was dead and the Matrix had won. But then of course he opens his eyes, stands to his feet and ultimately defeats the enemy.
Just about anyone familiar with God's word can see a picture of Christ, His crucifixion and Resurrection in that story. But even more so, that movie grabs me because of the picture I see of myself in it. See, after Neo momentarily suffered defeat and experienced death, he stood up and everything looked different to him. For the first time he could see past the facade that the Matrix had created, and could see all of this streaming code which was truth and reality. I get that...that is me.
I was once spiritually dead in my sins. All that I saw of this world and the people in it was tainted and masked by that sin. This world and all that it has to promise was like a glowing prize that I desired and dedicated my life to obtain. But then, when I believed, I was crucified with Christ, and likewise with Him I was resurrected from my spiritual death. And when that happened, I was like Neo, standing up to see the world in a whole new way. What once on the surface looked good, I then could see the bad in it for me; the things I thought would be a blessing, I then realized were really a curse; what had looked only like boring stories in a dusty book, then I could see was God's life giving words in His Holy Bible.
I think the Apostle Paul would have liked that movie because God took the scales off his eyes too, and then he could see the world clear enough to write "for we wrestle not against flesh and blood, but against principalities, against powers, against the rulers of the darkness of this world, against spiritual wickedness in high places."
I thank God for allowing me to see this world for what it really is. I may not be perfect, but by God's grace I am no fool. I don't get taken by the false promises that are offered to me in this age, because I can now see the streaming code. I thank God for opening my eyes to see, and I see that He is the greatest. He are the hero in my movie and the star in my show.