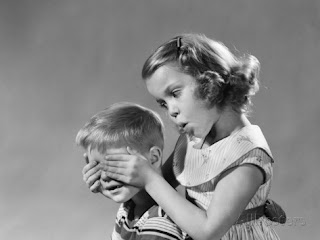 It amazes me how God brings certain things to my attention to teach me a truth. Like, the other day I was thinking back to when I was a kid and how much I hated it when someone would sneak up behind me and put their hands over my eyes. It was a common game for kids to play; to walk up, cover your eyes and say "guess who". It was fun to many and no one meant any harm by it, but I just hated that.
I guess I didn't like it for several reasons. For one thing, we were kids who played outside a lot, so those hands covering my eyes usually weren't the cleanest. But more than that I guess there was some fear of the dark, frustration over not being in control, and anxiety over what people were doing around me all mixed in there together. I suppose I liked it a little bit better when it was a little girl doing it, but even then it wasn't my favorite game to play.
I can't say that in my adult life that I would like that game any more now than I did then. I'm thankful that's not something we adults typically do. Yet there have been times when I felt like I couldn't see; like someone was covering my eyes. I have felt the anxiety and frustration of not knowing what's going on around me. But I am a little shocked and somewhat saddened to admit that now when it happens, it's my own hands that are doing it.
There are some things in life I really don't want to face. There are some issues and problems that feel like a little too much for me to bear. But they won't go away, so I cover my eyes, so to speak, so I can't see them. There has been hurt and pain I just didn't want to face; hard choices I simply didn't want to make; and my own shortcomings that I rather ignore. I feel real silly even typing these words, but I have no choice but to admit this to God. It's like I somehow think that if I can't see my problems, then my problems can't see me. Like somehow if I could just cover my eyes to some of these things for a while, that by the time I open them, they'll be gone... But they never are.
I need the Lord's help. I realize that I am at a place in my walk with Him that if I want to keep growing and going, then denial and avoidance just won't do. I now know that covering my eyes to my present problems also blinds me to His future blessings. Not to mention, when I close my eyes to the bad I also miss out on seeing the good. So I ask God to remove those hands that won't allow me to see, even when those hands belong to me.
Posted by Rev. Eric Evans at 6:19 AM