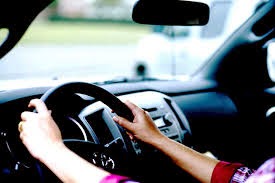 I was thinking that if I ever decide to change careers, a job that might be right for me is teaching drivers ed. Yeah I know, those words even feel weird coming from me. But since my oldest daughter has gotten her permit and then her license, and I have been instructing her in driving, I think it's something I could do and enjoy. Except for the near death experiences that come along with that job, I think God has given me the right temperament for it. But my experience is limited, so I guess I better wait and see.
I'm not sure what I expected from the drivers ed class that she took some months back. For some odd reason I guess I was at least expecting they would....teach her how to drive. But with the few days they spent in the classroom, and even fewer days behind the wheel, I realized that the class only introduced her to the concepts and skills in driving. Now it's up to me and her mother to actually teach her how to drive. But it's fine, I'm enjoying it, she is doing great, and like I said...I think I'm finding out I am kinda good at it.
However, in the midst of all that driving instruction there is one very important non-driving related lesson being taught, and it's being taught to me and not her. The thing is, I am teaching her all of the little things she needs to do and the details in the rules of the road; like...make sure your wheels come to a complete stop when at a stop sign or stop light; make sure to turn your signal light on far enough in advance of your turn to give the following cars proper notice; or don't wait til the last minute to start braking for a stop because you may not be able to stop, and it's hard on the brakes. But the lesson that's being taught is that at the moment some of these instructions are coming our of my mouth, I realize that....I don't always do them myself. A bit of shame comes over me because I know that I don't always come to a complete stop at an intersection; I don't always hit my signal well in advance of a turn, and I often bear down on my brakes at the last minute. In fact, one day she was driving, and I reminded her when making a turn as she holds the wheel at 10 & 2, to turn the wheel with hand over hand, which makes the turn smoother. Then the next day she was in the front seat with me driving, and as I was making a left turn with one hand at 12:00, she said "Don't forget, hand over hand". I think I responded with something like, 'years of experience...I can do it like this".
Though it was a light-hearted moment, it did cause a truth to settle on me. That truth was, any example that I want to give...I better live; that people learn more through the eye than the ear and it's better that I show them than tell them. And of course that's important for things like drivers ed, but even more so for the things I teach and preach from God's word. I know that the best instruction I could ever give of God's word is not from what I say from the pulpit on Sunday morning, but what I live in my life everyday. And though there has been a lot of change in me, there are still things that I teach that I don't do. And it is with that which I must go to God in much prayer.
I ask the Lord to keep on changing me. I know that I am better, but I also know that He's not done. I want Him to help me to live a life that shows His word and draws others to Him. That way, how I live is the example I give.
Posted by Rev. Eric Evans at 10:26 AM No comments: 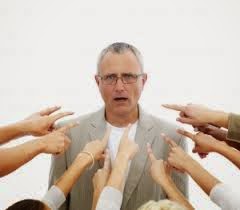 I think probably one of the most insulting if not threatening gestures a person can make to me or anyone else is a simple one that involves one finger. Not the one done with the middle finger pointed up, though that is a bad one too. I mean the one that involves the first finger pointed towards me. Yes, that gesture of accusation and blame, the pointing of the finger directly that says "HE DID IT!".
I remember when I was a kid, my cousin, nephew and I were playing in my room. With all of that lil boy energy we were just about bouncing off the walls. We were passing a ball around in the room, trying to have as much fun as we could without keeping too much noise. But, our excitement grew with our giggles and the play got out of hand. I threw it too hard and broke a ceramic bowl my mom had actually made herself in a class she took. Well of course, the next sound that followed the crash of that bowl was a loud "What was that!?" from momma. Then the next sound that followed was her footsteps down the hallway; and the next sound after that was my door swinging open. She looked at us, we looked at each other; she looked at the broken pieces on the floor; we looked at the broken pieces on the floor; she said "Who did it?". When I looked back up, I was staring at the tips of their fingers pointed right at me. And there I thought that we would band together, brother I got your back kind of stuff. But I found out that when the possibility of a spanking is looming, it's every boy for himself.
I have to admit that the sting of the spanking wore off relatively quickly, but the piercing of those little finger tips lingered for a while. To have gestures of blame hurled at me like stones hurt more than momma's hand on my backside. And I guess that's natural. No one wants to bear the blame. No one wants to be the target of anyone's accusations. I guess I use it as motivation. I don't want to be blamed for failing at work, so I work hard. I don't want to be the blame for my kids running a wild, so I try to be a good dad. I don't want to be the blame for my family not having what it needs to live so I watch my money and sometimes sacrifice things I'd like to buy for myself. No one wants a blaming finger pointed at their face, and neither do I.
In thinking about that, I think about how Jesus, over 2000 years ago, had many fingers pointed at Him. After He was arrested, He was drug down to the High Priest who pointed a finger in His face accusing Him of blasphemy. Then they drug Him to Pilate, then to King Herod, both not finding anything He had done wrong, then back to Pilate. Pilate said he found no reason to kill Him, so he said he would just whip Jesus and send Him back. But many of the religious leaders pointed their fingers at Jesus and shouted "Crucify Him!". Pilate was reluctant because he knew it was wrong, but he was afraid not to because he thought the Jews would start an insurrection. He remembered it was their custom to let a criminal go at Passover; so he asked if they wanted him to let Jesus go. They said they wanted him to release Barabbas instead, a murderer, then they pointed at Jesus again and said "Crucify Him!". And so he did.
I deserved to have those fingers pointed at me because I did break that bowl, and I have deserved fingers pointed at me many, many other times since then. But Jesus did not. He had done no wrong. But I am grateful that because of God's love for me, and Jesus' obedience to Him, our Lord stood before all of those pointed fingers...for us.
I thank God that at the Cross Jesus took away all my sins and all the guilt that came with it. With confidence and gratefulness, I can point my finger to Christ and say "He Did it!".
Posted by Rev. Eric Evans at 10:47 AM No comments: