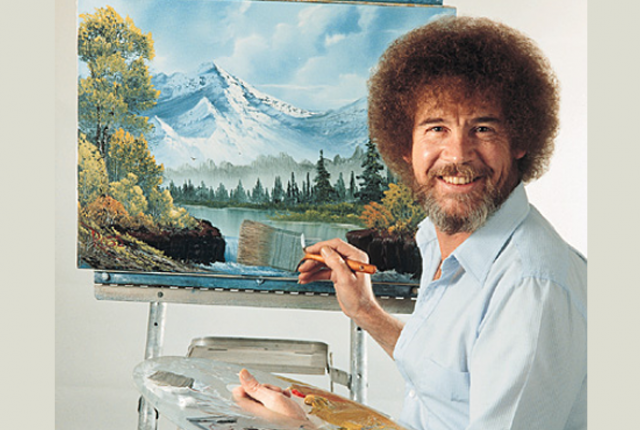 I am thankful that God teaches me His ways through things that I see in everyday life. It reminds me that He is real and that He cares about me. I mean, just recently I was reminded of Him in a show I had not seen in a long time. It was the PBS show "The Joy of Painting" with Bob Ross. It caught my attention because, well first of all he has a big, poofy, fro-like hairdo. And plus I remember how calming it is to watch him as he paints his pictures. His voice is very relaxing, and he has such a positive attitude while he is describing the natural features as if they were human. He often talked about the 'happy little trees' while he painted. I have always found it very therapeutic to watch his show.
In watching that show, I can see something different in it now than when I watched it before. I see God in it. From seeing that show again with spiritual eyes, I now realize that the Lord is the artist painting the picture of my life. Just like Bob Ross, He started off with a blank canvas, one that I had already messed up, but He wiped it clean with the blood of Jesus. Then He chose from globs of paint that by themselves and until they were chosen by Him were nothing more than an oily mess on His palette. And even when God first started painting, to me and I'm sure to others watching, all I could see in my life were smudges of color that made no sense. They looked like blotches that could never turn out to be anything good. But the Lord saw something. In fact He saw it all. Just like Bob Ross, before He ever lifted a finger towards my canvas, He already saw in His mind what the finished picture would look like. So now God is creating in me what He had always purposed before I ever existed. I still can't see it, but He can.
I don't always understand what is being done in my life, but I do better understand that it is God who is doing it. That helps me to trust the process more, especially when the strokes of His brush start to hurt. So, I will wait while He works. I will try to do better about questioning and complaining. There is nothing else He has created that is less than a work of art, so I know that if He started on me, He plans to create something great.
God is my master, and I want to be His masterpiece.
Posted by Rev. Eric Evans at 8:52 AM