It's Not a Magnifying Glass. It's a Mirror! 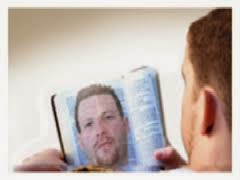 Most of you are probably familiar with King David in the bible. And if you are familiar with him, then you probably know that he was a godly man who did an ungodly thing. For the sake of time, I'm not going to focus here on the sin he committed with Bathsheba, and the subsequent sin he committed to cover it up by having her husband killed. If you don't know the details, read 1 Samuel chapter 11.  Instead, I want to focus on his reaction when his sin was pointed out to him.

The Prophet Nathan knew what David had done, and not because he was a prophet. Nathan could see that Bathsheba was already married to Uriah, that David had her summoned to his palace, that strangely Uriah was called home from the battlefield then sent back out, that he suddenly was killed in battle, and that shortly after David took Bathsheba to be his wife. Yeah, it was plain to see what was going on to Nathan and everyone else, except David. Sinful desires have a way of blurring our vision and lowering our IQ like that.

Nathan decided he needed to reveal to David his own sin; not to embarrass him or to dethrone him, but to save him. So he told the King a story. He shared a tale of two men. One was rich, and one was poor. The rich man owned many sheep, and the poor man had only one little lamb. The poor man raised that lamb in his home like it was his child. One day the rich man had guests over, and instead of taking one of his own sheep, he took the poor man's lamb, killed it and prepared it for dinner. (Now watch David's reaction)

The King was furious. David said that any man who did such a thing should die. Then Nathan looked David in his judgmental eyes and said some of the hardest yet must helpful words that he probably ever heard. He said "You are that man!". (Again, watch David's reaction). He could have told Nathan he was crazy and didn't know what he was talking about. Heck, he was king and could have had Nathan killed on the spot. But instead, he fell to his face with a broken and contrite heart, and cried out "I have sinned against the Lord". That's because at that moment, David's eyes went from looking outward to see the faults of others, to looking inward to see his own.

You know we might think that David had it made to have a Prophet right there with him so that God could speak directly to Him. But we've got the greater benefit of having all 66 books of the bible at our fingertips so that God can speak to us everyday. And many of us use it, but we use it the wrong way. We want to use the bible like a magnifying glass so that we can examine the faults of other people. We read the scriptures or hear the scriptures preached and immediately think of other people it applies to, and how they are wrong, and how they need to change. But God did not send me or you His word to be a magnifying glass. He sent it to be a mirror. He wants us to look into His perfect word, to see His perfect ways, and to meet His perfect Son. And when we do, it reflects back to us who we really are and reveals our imperfections. Not so the Lord came shame us, but so He can change us.
James 1:23-25 says "For if you listen to the word and don’t obey, it is like glancing at your face in a mirror. You see yourself, walk away, and forget what you look like. But if you look carefully into the perfect law that sets you free, and if you do what it says and don’t forget what you heard, then God will bless you for doing it".

So the next time you pick up your bible, and I hope it's real soon, say to yourself "This is not my magnifying glass...this is my mirror". Brace yourself for what you might see, then let God change you.
Posted by Rev. Eric Evans at 6:15 AM