From Mud to Mansion 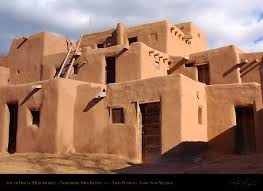 If you are at home, take a moment to look around at your house. If you're not, think about what your house looks like. Notice how it's constructed, and what it's made of. Pretty sturdy, huh? Well, it has to be. Not only does it have to support you walking around in it, but it has to withstand rain and wind and lots of other stuff. Now, think about how long your home has been doing that. Some of you may be living in fairly new homes, but some of you are in homes that have been standing for years. Amazing isn't it?

I'll tell you what's else is amazing. There are some dwellings in the Southwest United States that have been standing for over 1,000 years; Some with people still living in them. And what's even more amazing is that these homes are mostly made of...mud. Yeah, that's right mud. They're called pueblos. Whereas your home is probably made of lumber and bricks and nails, and concrete, and shingles, and lots of other stuff; these homes are made of adobe which is dirt mixed straw that hardens like concrete. These homes are good for insulating from the southwest sun, and obviously good for withstanding the test of time.

Guess what you are mostly made of? Mud!; or more precisely dirt. At least our forefather Adam was. The bible says in Genesis 2:7 that God formed man from the dust of the ground and breathed the breath of life into him. And like the pueblos, these bodies that God created are very durable. We can last a long time even through hardships, fights, sickness, injuries, and even having babies. I've witnessed that twice, and still don't see how women make it through that (much respect to the mothers). Of course some lives are cut short, but some last a long long time. For example, my great grandmother was 105 when she passed away.

However, like the Pueblos, at some point these old bodies will finally fall to the wearing away of life. And what once was the physical structure that houses who we are eventually returns to the dust of the earth, leaving only the memories for those who will remember. But I hope you know that end is not our end. Who we really are runs deeper than the flesh and bones in which we currently dwell. Inside of that earthly home is another one of God's creation that will never cease to exist...our soul. And it is not a question as to IF our soul will live forever, but WHERE! Now, we live in the bible belt, so I'm pretty sure I don't have to spend time on this post describing the two choices available to us in eternity. But what I will say is that I hope you've made the right choice.

The Apostle Paul, who at the time was faced with the end of his own life here on earth, wrote in 2 Corinthians 5:2 "For we know that if our earthly house of this tabernacle were dissolved, we have a building of God, an house not made with hands, eternal in the heavens." You see, we who have accepted Christ get to trade in this earthly shell that's little more than a tent for a mansion made in glory. And it is a glorious home we get to dwell in forever. And when I say we, I hope that includes you.
Wouldn't you like for your story to read "From mud to mansion"?
Posted by Rev. Eric Evans at 7:51 PM