Before the Concrete Cures 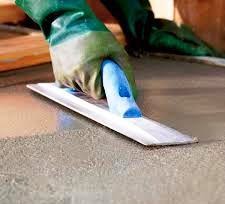 I always consider it an honor to officiate and/or preach at the home-going service for one of our members, or someone I know. It is a heavy responsibility to be God's mouthpiece for grieving family members and friends. I also recognize it as a valuable, evangelistic opportunity to share the gospel of Jesus Christ with some who might not otherwise go to church to hear it. When given the chance to serve the Lord in that way, I don't take it lightly; and I don't attempt to do it without His help.
Just yesterday, I was honored with such an opportunity when asked to preach at the funeral for Mr. Buddy Lynch. He was known and respected by a lot of people, as was evident yesterday. Many people knew Mr. Buddy by his trade; he had a concrete business. Lots of people there had foundations, sidewalks, steps, and many others things made of concrete poured and finished by him and his crew. So, because of that, God lead me to share a word with them about concrete, which I'd like to now share with you.

Concrete has been around for thousands of years. From the pre-modern era, the Romans are often credited for using it. Concrete Roman structures still stand today, including the Pantheon, which is over 2000 years old. Other notable structures that used concrete in other parts of the world include the Hoover Dam and the Panama Canal. The amounts of concrete those projects used will boggle the mind. Today it is credited as being the most widely used, man-made material. The only natural material used more is water.

Concrete endures because it is so strong, especially when you add reinforcement like steel bars. But it came to be so widely used because of it's "workability". Whereas with stone structures, you've got to shape it and move it and lift it and stabilize it. And if you mess up and don't' chisel it the shape you want it, you have to start all over again. But concrete can be mixed on site or trucked in; pumped through pipes; rolled in a wheel barrel; or carried in a bucket. Then you can make it into any shape you want by pouring it into forms. Once it is poured, the construction science turns into an art. A skilled craftsman like Mr. Buddy can finish the concrete with a trowel to give it any shape and texture. People even write their name or the date in it, and it will practically last forever; or until the Lord returns at least. All of that you can do with concrete, but…you have to do it before the concrete cures. Once it sets…it’s set.

Concrete is a lot like you and me. All of us, some more than others, have that workability quality. We all start off as a rough, rocky, mushy mess. We're born sinful and self-centered. But in the hands of God, and having the willingness to let Him work, we can be formed and molded into something so much better. The Holy Spirit, using the bible as His trowel, can smooth away our rough edges, and shape us into the image of Christ Himself. But one day, we'll all draw our last breath, and at that instant our concrete will have cured. Whatever we are at that moment, we will be forever. Whether we're with God or without Him; saved or lost, we'll be that for the rest of eternity.

So I encourage you that while your soul is still like wet concrete; while there is still some workability about you, let God change you. Let Him save you and create a whole new you. Let Him put your past fully in your past, and lead you into a new future. Let Him change your situation, your family, your world around you by first changing you. And please...please let Him do it before your concrete cures!
Posted by Rev. Eric Evans at 5:57 AM