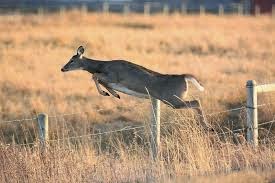 Most of my morning commutes to work are pretty boring and monotonous. I've been at my job for 13 years, pretty much driving the same way errr day. But every now and then the Lord will sprinkle a little excitement in there to keep it interesting. Well, day before yesterday, He did just that. I was driving along with a line of a few cars in front of me. I was approaching this sharp curve, people from around here know it as dead man's curve. I noticed the car in front of me, and then the cars in front of it, hitting their brakes, way too abruptly to be braking for the curve. Without knowing why, I figured it was a good reason, so I hit my brakes too. That's when I noticed a momma deer with two young deer following behind her. They weren't babies, but still young enough to be closely following their momma. They were crossing the road from the left side to the right. They were looking real jittery like they had been on the run for a while. It's deer season, so I'm sure they had been. I was so glad that all of us were able to slow down in time for them to safely cross over. This would have been a much different post had we not.
Well after they cautiously crossed the road and safely reached the other side, they shifted back into high gear to find their way back into the woods. But, they quickly found a pasture fence blocking them. All three stopped at it, and I imagined the momma deer saying something like "You've got to be kidding me. Dogs on my butt, almost hit by cars, and now this?! Can a doe get a break?". To which I mentally replied "I know the feeling sista girl...story of my life."
All of us were slowly creeping by thinking they may turn around and come back across. But I think she started singing that William McDowell song to herself "I won't go back..I can't go back...to the way it used to be". And let me tell you. Sista girl bent her knees slightly, and leaped right over that fence, which was about 4 or 5 feet tall. No running start or nothing. I was like..."Go head then!". But her babies were like..."Hey, what about us?". They both approached it, sized it up, and I guess figured they didn't yet have it like momma. But I believe they heard momma singing, "I won't go back...I can't go back.." (You can tell I grew up on lots of cartoons with talking animals). So they both got down on their bellies, and one after the other scurried under that fence. That bottom strand of high tensile wire couldn't have been more than 12 inches off the ground. I've never seen a deer get down like that, literally or figuratively speaking.
Well, if you've been reading my posts for any amount of time, then you know I'm always looking and listening for God in everyday experiences. And what I learned from that experience is that..."I won't go back...I can't go back...". Hey, I know we all go through rough times in our lives. I know you've faced many days like I have where it felt like the dogs were on your butt, the car horns were blowing, and a fence popped up from nowhere blocking your path; even if we are Christians. The children of Israel faced it too. God sent Moses to deliver them, yet no sooner than they passed the "Thanks for Visiting Egypt" sign, Pharaoh was hot on their tails, there were mountains on both sides, and the Red Sea in front of them. Then the people started crying and complaining and saying to Moses, "Why you bring us out here only to die". Moses prayed to God, asking what he should do. And the Lord spoke these words very directly and firmly to Moses, "Wherefore criest thou unto me? speak unto the children of Israel, that they go forward." (Exodus 14:15)
We've got to do like the Lord showed Moses and Israel. We have to learn to let our faith in God overshadow our fear of the unknown. We've got to remember that everything God has promised is ahead of us and not behind us. We've got to keep telling ourselves that the past is called the past for a very good reason. Then we should take a cue from that momma deer and keep moving forward no matter what. So, I've decided that whether I'm able to go over, or I have to crawl under, either way..."I won't go back...I can't go back...".
Posted by Rev. Eric Evans at 3:02 PM