You Hate Me? But You Don't Even Know Me! 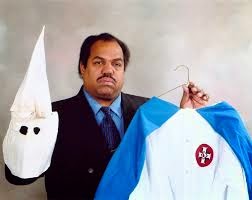 Ok...sensitive subject...deep breath...ok go...RACISM! I know right. Makes me queezy too. But real issue? I think so. Still exists? I think so. Things gotten better? I think so. Still need the Lord's help in doing away with it? I know so. Well the other day I heard a very interesting interview on the radio of a man named Daryl Davis, an African American musician who met a member of the KKK in a bar where he was playing. The guy liked his music; said he played just like Jerry Lee Lewis. He started inviting some of his fellow klan members to hear him, and they liked his music too. Some of them would sit and talk to Daryl after his set, while some wouldn't even shake his hand. Daryl and his "buddy" from the klan kept in touch as he would show up to hear him whenever he was back in that bar. Long story short, after having lost touch for a few years, Daryl looked up his buddy just to see how he was doing. Lo and behold he had quit the klan. He said that after getting to know Daryl, he no longer could find good reason to continue being a part of it.

Daryl, who'd become interested in what the klan believes in and why they believe in it, started writing a book about it. He talked his buddy into giving him the phone number of the grand dragon of the KKK. He wanted to interview him. (Oh yeah I said long story short) Well they had a tense first meeting, but gained respect for each other. Davis developed something of a friendship with this high-ranking klan member, who later became the Imperial Wizard. But what fascinates me most about this story is the reason Daryl pursued this topic so obsessively. He said that he was trying to understand how a person who had never met him could hate him. How someone who knew nothing about him could despise his very existence.

I think that pretty much sums up the evil that is embedded in racism. To think that someone would hate me simply because I'm Native American; or you because you're African American; or you because you're Caucasian; or you because you're Asian, or Mexican, or biracial, or because they don't know what you are. And though in the US race-based hate has been a cancer in our society for a long time, we certainly don't hold a monopoly on it. People hate other people they don't even know all over the world, and not always based on race. Just ask the Hutu and Tutsi in Rwanda, or the Jews and the Palestinians in the Middle East. The branches of the hate tree reach far and its roots run deep. In fact they run all the way back to the garden of Eden.

Adam and Eve encountered the first racist ever known to mankind; satan. Oh, he doesn't just hate the black race, or the white race, or the Indian race, or the Asian race. No, he's pretty much equal opportunity with his hate. He hates the human race. And if you think that the death, pain and suffering that racism has caused in this world is terrible, then you don't even want to know what our great adversary has in mind for all of us. And remember, he hated you before he ever knew you.
So what can we do about that kind of hate? How can we guard ourselves against that kind of evil?
Well, we can't. But God can. We should be encouraged by God's word that tells us "It has come at last; salvation and power and the Kingdom of our God, and the authority of Christ. For the accuser of our brothers and sisters has been thrown down to earth, the one who accuses them before our God day and night. And they have defeated him by the blood of the Lamb and the word of our testimony." (Revelation 12:10-11)

You see, Jesus is in charge and He will protect us. But we have to believe in Him and what He did on the Cross (the blood of the Lamb), and we have to tell others about it (the word of our testimony). Peace summits are great, but ultimately they won't work. We can sing We are the World until we're blue in the face, but that won't stop it. As Rev. Billy Graham said, the only force greater than the evil in this world [including racism] is the love of God. And remember, "Greater is he that is in me, than he that is in the world" (1 John 4:4)

Try Jesus!
Posted by Rev. Eric Evans at 6:00 AM No comments: