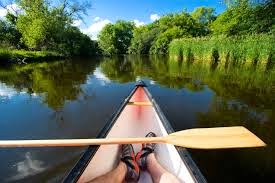 Did I tell you about the time I fell out of a canoe? Well it was the one and only time I have ever been canoeing, and of course I fell out of the boat. It was several years ago that I participated in a regional leadership program. The program not only included various workshops and training sessions, but we also had team-building activities, one of which was to pair up and canoe down the Tar River. I had never been canoeing before, and thought it would be a great experience for me, even though I was a little nervous.
So the instructor gave us the how-to's and the what-not's, fitted us with a life jacket and then pointed us to our canoes. The lady that was sharing the boat with me, it was her first time too; she was in the front and I was in the back. I thought it would be a better spot for me, but later found out it was more responsibility than I was ready for because it was my job to steer it. But, I figured it couldn't be that bad because it was in the middle of a dry summer and the instructor said the river was really low and slow, and in some places we may even have to get out and carry the boat for a short distance.
Well God's word says there is nothing too hard for Him, but sometimes I think there is nothing that easy for Eric. It was a long canoe, with enough room between me and her that two other people could have joined us. And that made coordinating our paddling difficult. About halfway through our trip down the river, somehow she shifted too far one way, and I shifted too far the other, and when we both tried to straighten ourselves up, we leaned too far the same way and....the boat tipped over. Now, through most of the trip, the river was barely deep enough to get my knees wet were I walking across it. But, wouldn't you know that where we fell in was one of the few spots that was about shoulder deep.
So then was the challenge of getting back in the canoe. The instructor had told us what to do if we happened to fall in, but I barely paid attention because I thought how hard could that be. Well I found out exactly how hard. I am so glad the instructor paddled over to coach us back in the boat. We first had to flip it back over, then, with the boat now at eye level, had to reach across to the opposite side, grab on and pull ourselves in with this funny kicking, wiggling, don't pull too hard cause you'll be right back in the water motion. And to my surprise, somehow we did it. We were soaking wet, and my partner was piping mad, but..we made it.
I think God reminded me of that story because being on this Christian journey is a lot like that experience on the river. Sometimes, even when life seems slow and easy, it can throw you for a loop and we can find ourselves neck-deep in water. But even with the reality of that, I thank the Lord that when I gave my life to Him, He didn't just let me set sail solo. He gave me all my brothers and sisters in Christ who have turned their boats around and are now paddling in the same direction as me. In particular, those who are in my church family are in the same boat. As was on that day on the Tar River, we don't always see eye to eye, and we sometimes have a hard time coordinating our strokes; but we're at least going in the same direction in the same boat. So if we float, we float together, and if we tip it over sometimes, we're at least in the water together.
I know that no church could ever be perfect because it will always be filled with imperfect people. But if you are a part of a local church family, then you need to thank God for the blessings of the Body of Christ. It's so good to know that we are never in this river alone.
Posted by Rev. Eric Evans at 10:56 AM