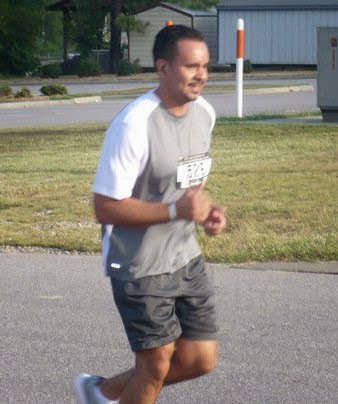 Those of you who have been following my posts for some time might remember that I try to be something of a novice runner. I've been jogging off and on for several years (sad to say more off than on). Right now I'm on. I used to run outdoors mostly, but now I do most of my running on a treadmill. But look, I'm certainly not bringing this up because I'm trying to get you to think more highly of me than you ought to. Trust me. It's not that impressive. Not to mention, my weight is not where I want it to be, and my clothes don't fit like I'd like them to, and I definitely have as many insecurities about myself as I do things to brag about. But....I'm working on it! I do my best to take the emotional energy I could be burning by whining and complaining about it, and use it to do something about it.
With that said, let me get to my point.
Yesterday morning I got up early enough to run before church. As I dragged my sleepy behind out the bed and eventually out the door, I thought about how much I was dreading what I was about to do. I would think that by now, it would be easy for me. After all I've been jogging for a long time (off and on), and run at least 3 times per week, often more. During the week on my lunch break I run for 30 minutes non-stop at the gym. When I run at home, I run 2 to 3 miles. I have even completed a 5k race (3.1 miles if you didn't know). Yet, I realized that it never gets easy, and I never enjoy it. I have pushed myself to run longer and faster, and my legs and lungs feel stronger, but it never gets easy to me. Some people can jog with their buddies and have a conversation while doing it. I can't. In order to finish my run, I can't waste one single breath on doing anything else. I think I mentioned in a post some time back that just about every time I run, something different hurts at the outset and I have to run through it.
Don't get me wrong. I definitely enjoy the benefits of running; the physical and mental affects, and the feeling of accomplishment. But I never "get the urge" to go for a run. Sure I get a craving for something particular to eat, or I might get in a mood to do a certain thing, but I have never rolled out of the bed and said "Wow, I sure do feel like going for a run today"...Never! On the contrary, I always have to coach myself into doing it. But...I do it! Though I don't feel like doing it, and it's hard for me, I know it's good for me, so...I do it!
Similarly so, I have found that there are lots of things we are called to do as Christians that are not easy. The Bible is filled with the thou shalts and the thou shalt nots. And honestly, some of them are things that I never feel like doing. Come on now, tell the truth. Have you ever felt like turning the other cheek? Heck no, I haven't! You ever felt like loving your enemies? Does it come naturally for you to think of the good for others before yourself? You ever roll out the bed and thought "I sure do feel like sacrificing my desires to be obedient to God today?" I haven't.
But you know what I've learned as I've matured as a Christian? I've learned that I do what God says, not because I feel like it or its easy to do; I do it because He said so. And I do it because I trust Him and I know it will be good for me, even when it's not good to me. I used to expect that there would come a time that I would feel like doing everything God says, or the time where every Godly thing would feel joyous and easy. Some things do. But many never will. Not as long as we're living inside this body that has a tilt towards sin. The Apostle Paul said it like this, "For I know that in me (that is, in my flesh,) dwelleth no good thing: for to will is present with me; but how to perform that which is good I find not" Romans 7:18. So even though I huff and puff and sweat and ache...I run. And even though I don't always understand and seldom feel like it...I obey.
Let's pray together, shall we...
Lord, I know my heart leans towards you, but my flesh often tries to push away. I may have gotten the wrong idea and unrealistically expected this Christian life to always be easy. But I understand now what you meant in Romans 12:1 where You urge me to offer my body as a living sacrifice. Father, give me the power to do good even when it doesn't feel good. You are worthy of that sacrifice. I love You. In Jesus name. Amen!"
Posted by Rev. Eric Evans at 2:06 PM No comments: