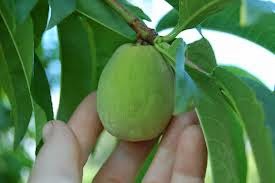 When I was about 10 years old, my friend and next door neighbor Chris and I were outside playing. We obviously had gotten tired of playing our normal games because we decided to see who could throw something over this packhouse in our backyard (for you city-slickers, that's just a simple barn where you kept feed, seeds, tools, etc). We were looking around for something to throw and I guess we had chunked just about all the rocks in the yard already. The only thing I could find to throw was a green, unripened peach hanging on the peach tree. Now my dad loves to plant fruit trees around the yard, and there were two peach trees near the packhouse. It wasn't like I had never heard my dad say with a stern voice "Now, don't yall be messing with those peach trees" before, so I don't know what caused my temporarily lapse in judgment.
So I proceeded to make my first attempt to throw the peach over the packhouse. Oh, did I mention that my dad had just paid someone a couple hundred bucks to paint this packhouse a nice, bright white? Oh did I also mention that at age 10 if my arms could at all have been considered guns, then they would have been cap guns? So needless to say my attempt to throw the peach over the packhouse was a vain one. That green peach smacked right on the side of that nice, white wall. Again, still in my temporary lapse of sanity, I thought it was funny that it left a perfectly round, green mark on the side of that building. I looked at Chris and he was chuckling too. Later I realized it was because he knew I was gonna get it, and he couldn't wait to watch. So, still copping an insanity plea, I grabbed another peach and threw it; and another and another. Til that barn was a nice green, polka dotted pavilion. It was all smiles and giggles until I heard that back screen door open, and my mother call my name with a not-so-pleased tone. I mean, I only have four letters in my name, but she dragged it out like it was 24..."EeeRrrrrriiiiiC!"But the C on the end snapped like a whip, and I knew it was foreshadowing the pain to come.
So, Chris laughed and ran home, I got called in the house, momma spanked me and sent me to my room. As I marched down the hall, I heard the dreaded words echoing behind me..."Just wait til your daddy gets home...gets home...gets home....". So I sat in my room dreading to hear his truck drive up. Soon it did. I heard talking in the kitchen. It was all low mumbling until I heard my name. I waited. And waited...and waited. Finally momma called me to come up front. Going back up the hall was like dead man walking. I turned the corner, bracing myself. I think I was even squinting like I thought my dads yells were going to put my eye out or something. When I turned, they were all sitting at the table, food out, and plates set. My dad looked at me and said "Come on let's eat." Wha...What? Had the governor called? Was there new evidence discovered? Did Chris feel sorry for me and confess to the crime? Whatever it was, I didn't say a word. I just sat my grateful behind down at the table and waited for the potatoes to be passed.
I shared that story not so you can laugh at me getting a whooping for being stupid, though the folks in church seemed to enjoy my pain. But I share that to highlight a truth about God. And the truth is, God is always intolerant of our sins and yet He is also always gracious to forgive us of them. Like I deserved to get that spanking from my mom, and truthfully deserved one from my dad too. My parents could not tolerate that behavior from me, nor can God from us. I mean, imagine how bad we would be if the Lord never held us to His standards of right and wrong. I shudder to think. But at the same time, because I am a believer in Christ, and through Him a son of God, I know there is always grace and mercy available which I don't deserve. See, while I was in my room, I didn't feel so much like a beloved son of my mom and dad. In fact, I felt like an isolated outsider awaiting banishment from our home. But I wasn't. I was still their son, and they still loved me, and they still saved a place at the table for me.
Romans 8:15 says "For ye have not received the spirit of bondage again to fear; but ye have received the Spirit of adoption, whereby we cry, Abba, Father." But this only applies to those who have been adopted to God through faith and confession in Christ. Don't you want a Father like that? If you don't already have it, then I ask...what are you waiting for? There could be a place at the table for you too!
Posted by Rev. Eric Evans at 4:52 PM