I've Got the Power! 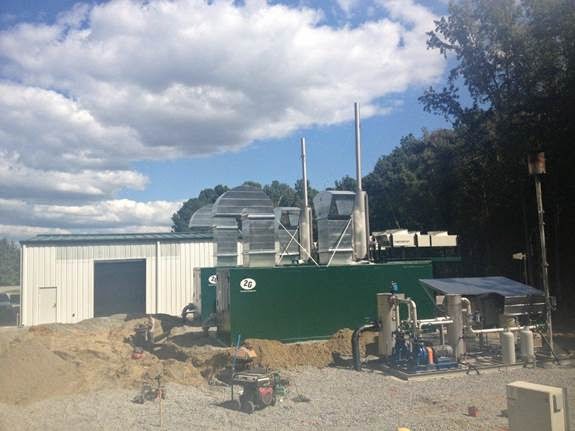 I’ve had the opportunity to work on a lot of different kinds of projects in my professional career, but one of the most interesting has been this landfill gas project. Edgecombe County Government, my employer, now has this pretty cool contraption that takes landfill gas and turns it into electricity. This is how it works. Trash is piled up at the landfill and covered up with dirt. Then more trash on top of that and more dirt. Over and over until you’ve got this mountain of trash and dirt. As the trash decays, it produces gas, methane gas to be more specific. It’s the same gas you produce (if you know what I mean). Well that gas is flammable (I know you’ve seen it in the movies, but don’t go and test it out on your own). Vent pipes are put all over the landfill, they’re all connected to a huge vacuum, and the gas is sucked to a central location. That gas is then used as the fuel to run two huge engines that turn generators which produce electricity. And it’s a lot of electricity; enough to power several neighborhoods for years. And you’re thinking “Amazing!”. I know, right! It’s taking that stinky, offensive gas that normally would float up to the atmosphere and damage our ozone layer, and turning it into power.

Let me switch gears on you for a second. The other day someone said something hurtful to me. I don’t know if they meant to hurt me with the comment, but it hurt nonetheless. What was shaping up to be a good day, all of a sudden got pretty gloomy. I kept churning that comment over and over in my head, and that lead to other negative thoughts, and it put me on a short path to a pity party. But God brought that landfill gas project to mind. He used it to remind me that I can take that stinky, offensive comment that would normally eat away at my attitude, and instead turn it into power. And that is what I did.

Joseph in the Old Testament was beaten by his jealous brothers, thrown into a pit and then sold into slavery. Later he spent time in prison over a false accusation. Yet still he rose to second in command in all of Egypt. Eventually his brothers would have to come to Egypt to survive a famine. And do you know what Joseph said when he saw his brothers again? In Genesis 50:20 he said “You intended to harm me, but God intended it all for good. He brought me to this position so I could save the lives of many people.” With God’s help, you and I can do like Joseph and take those stinky, offensive things people say and do to us and turned it into power. Not just the power to live through what happens to us, but also the power to forgive for what happens to us.

So when that stinky stuff comes your way, lean on God and say to yourself "I've got the power"!
Posted by Rev. Eric Evans at 7:30 AM No comments: