How We Look at the Law 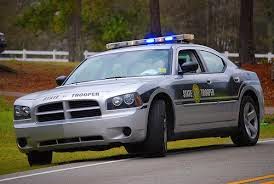 So the other day I was driving to work. I had a late meeting the night before and was pretty tired. I wasn't dozing or anything, but apparently my mind was not totally focused on driving. I was approaching an intersection and saw that the traffic light had switched to yellow. You know the thing about driving after you have done it so long, is that many of your decisions and actions are processed in the back part of your brain. That is, you do it almost automatically without putting a lot of thought into it. Well, on that morning, the back of my brain made a serious error in judgment. It decided "Oh, let's hit the gas and make it through this light before it turns red." There were two important pieces of information that the back of my brain left out in making that decision. 1) I was really too far from the light to make it through before it turned red; and 2)....There was a state trooper sitting at the stop light waiting to cross that intersection. I know, I know. Really bad judgment. Shocked me too. I am really a good driver, but...anyway.

So you're wondering, what did I do. Well I'm glad that the back of my brain passed that decision off to the front of my brain. And it quickly decided that running that red light in front of the trooper would be bad, and run that red light INTO that trooper would be worse. So it sent a signal down to my foot which proceeded to jam on the brakes. I mean jam on them too. It's a good thing that cars now have anti-lock brakes, else I would have burned two streaks right up to that intersection; and by the time the smoke cleared from the burnt rubber, that officer would have been standing at my window with ticket book in hand. My tires screeched a little, and everything in the car went flying forward, but the car stopped in time. The light changed, and the officer passed on through the intersection without even looking my way.
As my light turned green again, and I proceeded on my path, my heart was about to break down the door of my chest. The only thing I could think of at the moment was how that highway patrolman could have "gotten me"; how he would have written me a ticket, and I would have to pay a fine. That's how we often see them; as the ones who catch us and fine us or arrest us. So we in a lot of ways, we view them as the enemy. We flash our lights at each other on the road to warn of one spotted. Now with smart phones and social media, we post it on Facebook and Twitter to look out for "the law". But now that my heart has stopped racing and the color has come back to my face, I realize that "the law" probably saved my life. Had I not seen that black and gray car sitting at the intersection, I might have tried to make it through the light and perhaps could have run into another car. Or many, many other times I may have driven too fast or too recklessly. So really, "the law" is not my enemy; it's there to help me.

And that is how we need to see God's law, His holy word. Many see the bible as just a rule book that steals our fun and cramps our style. So we either totally ignore it or try to find ways around it. But the closer I have gotten to God through reading the Bible, I see now that He did not give us His law so He could sit back and judge whether or not we cross our T's and dot our I's. No, He gave us the law to protect us, to bless us, to prolong our lives, and to fill it with joy. As dangerous as the roads would be if there was no "law" on the road, think of how dangerous this world would be without God's law. The world is bad enough as it is, but think if there was no absolute truth to show us right from wrong; no moral compass to guide us through a self-seeking, sinful world. It would truly be hell on earth.

How we look at the law matters in how we will follow it. We should see what the psalmist saw when he wrote "Unless thy law had been my delights, I should then have perished in mine affliction." Then you will realize that God is for you and His word is here to help you.
Posted by Rev. Eric Evans at 10:18 AM