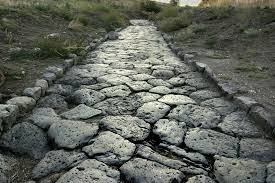 The Roman empire was one of the greatest civilizations ever. Not because it lasted the longest or it's army was the strongest, but because of it's influence throughout history. Certainly the Roman Empire spread its influence in commerce, language, art, politics, and warfare to the lands that it directly conquered. But, that influence also permeated throughout much of the rest of the world and throughout history. One of the main reasons its influence was able to get around so well was because of one of Rome's greatest accomplishments...roads. Romans took land travel from what had been mostly poorly kept foot paths to a system of stoned, well-drained and methodically interconnected roads. At its peak, the Roman empire laid claim to over 250,000 miles of roads. And they invested so many resources to such a road network because they knew that to grow and maintain an empire, they needed a way to easily move both military and goods.

But my purpose is not a history lesson, so let me get to my point. Not only did these roads make it much easier for Romans soldiers, Roman goods, and Roman ideas to get around. It also made it easier for the Gospel Message of Jesus Christ to travel too. Jerusalem and all of what we know as the Holy Land had become a part of Rome's conquered empire. So when Jesus gave His instructions to the twelve, and the Disciples became Apostles, the Roman roads made it much easier for them to 'go ye therefore'. The Apostle Paul often traveled throughout by boat to carry the good news, but he also traveled a lot on those Roman roads. And the amazing thing is that the Romans started to build that network of roads about 500 years before Jesus was born in Bethlehem. So from that we can see that God was literally paving the way for the love of Jesus to spread and for many to hear of that good news.

That causes me to press pause and reflect. Just think of how long before you and I were ever born, God was already paving the way for us to be where we are. And long before I was ever in church on that Sunday in 1997, He was laying down the stones so that I could hear of what Jesus had done for me. Not only does that encourage me looking back, but it also gives me hope looking forward. I know the Lord has already laid out my path to get me from here to where I need to be. The things I need to have, the people I need to meet, the experiences I need to go through. I believe God when He said in Jeremiah 29:11 " For I know the plans I have for you,” says the Lord. “They are plans for good and not for disaster, to give you a future and a hope." I also know that God's way is not a crowded path. Not many are willing to go down that road because it requires sacrifice. It requires us to take the back seat and letting Jesus take the wheel. But I am ready to go down that road less traveled.