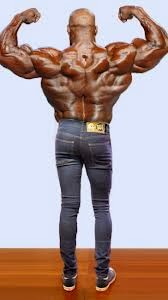 I posted something a little while ago about the pushes and the pulls. Remember? I used bodybuilding as a canvas to paint a picture of how we need learn to balance our pulling and our pushing; to not just pull things towards ourselves in a selfish, self-centered manner; but to also think of others and to push towards the needs of those around us. To not always be in a mode of pulling stuff to us that we want, but to sometimes push things away that we don't need.

Well, I'd like to add to that canvas, and submit to you that in our spiritual workout we not only need to focus on the pushes and the pulls. But we also need to make sure we workout our legs. See, when I was more into weight training, as opposed to the cardio workouts I do now, I always hated leg day. Not sure why. Maybe it was that the workouts were particularly hard for me, or that the recovery was a pain to deal with (some of you are gym rats and know what it's like with your legs being sore and looking like you're walking around on hot coals). Whatever it was, I frequently skipped leg day.

Skipping leg day, physically speaking, only left me with the inability to police-kick a locked door open if I needed to. I seem to be managing life ok with that handicap I suppose. But spiritually speaking, skipping leg day will prove to be much worse for us Christians.

Let's use the news about Phil Robertson from the reality show Duck Dynasty as a backdrop for our conversation. You may not watch the show, but I don't know how you could have gotten out of the bed in the last few months and not at least heard of it. I happen to love the show and love that family's story. I am glad there is at least one show on tv of a family who loves God, and to have something I can watch with my daughters and not have to the hold my finger on the trigger of the remote in case a bad word or nude scene jumps out at us. Now I certainly could not see into Phil Robertson's heart when he quoted the scripture about homosexuality and other sins, so I don't know if there was love in it or hate in it when he quoted the Bible. God will judge that. But what I do know is that...he quoted the Bible. And I believe that the Bible is truth...ALL of the BIBLE! And its truth is not dependent on me or anyone else believing it or accepting it. That's what makes it truth. Opinions fluctuate; truth does not.

I don't know whether or not A&E will allow Phil back on the show, or whether he even wants to. The show seemed to be more of a nuisance to him, and I think he only did it because he couldn't ignore the opportunity to share Jesus with millions of people. Frankly, I am surprised that the show has been on this long being that they end each episode with a prayer to Jesus, or that they show them blasting ducks out of the air with shot guns. Nevertheless, I do believe that all the hoopla about Phil being kicked off the show is something very important for us as Christians. What it is, is a reminder that we better…not…skip…leg day. Though we live in a society that supposedly promotes tolerance of the beliefs and choices of individuals, it is proving to be less and less tolerant of our belief in Christ and our choice to share God's word. So as Christians we need to have strong legs and be prepared to stand. I don't mean to stand up and fight. We don't have to, nor are we called to, defend God's word. It defends itself. But we are called to stand by living it and sharing it and leading others to Christ with it. And as we stand, we stand as Jesus stood; on truth with forgiveness, and grace and love.

So as the Apostle Paul encouraged the believers in Thessalonica, I encourage you with his words to, “…stand firm and keep a strong grip on the teaching we passed on to you both in person and by letter.” 2 Thessalonians 2:13