Take Time to Be Thankful 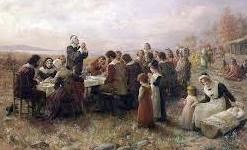 “In everything give thanks: for this is the will of God in Christ Jesus concerning you.”  1 Thessalonians 5:18
________________________________________
Long ago, Europeans left an old world to come to a new one; some for the satisfaction of exploring; some for economic opportunity; some to be free to worship in their own way. Whatever the motivation, they struck out together on a long journey for a new life. This new world was both full of promise and laden with problems. Many of these Pilgrims, as they came to be known, were Puritans, a branch of Protestant Christians. They were separating themselves from the Church of England, and were striving to be “purified” from what they saw as corruption in the church. So with Bibles in hand and hope in their hearts, they climbed on boats to sail to a new land.

In September of 1620, one such group of Pilgrims boarded a boat called the Mayflower and set sail for America. After about 2 months of hard travel, they reached Massachusetts and started building a settlement called Plymouth. They were ill-prepared to survive the winter they had walked into. Though they started building their settlement, they lived off their docked ship through the winter. Many did not make it to see Spring. History teaches us that friendly Indians of the Wampanoag tribe, most notably one named Squanto, showed the Pilgrims how to not only survive, but to thrive by farming and fishing. And thrive they did. By summer, their settlement was established and crops were growing in the fields.

As it had already been tradition among the Puritans, and many cultures for many centuries, the Pilgrims decided to have a feast the fall of 1621 to celebrate the bounty of their harvest and to give thanks to God. One Pilgrim wrote home of the celebration, “Our harvest being gotten in, our governor sent four men on fowling, that so we might after a special manner rejoice together after we had gathered the fruits of our labor. ….And although it be not always so plentiful as it was at this time with us, yet by the goodness of God, we are so far from want that we often wish you partakers of our plenty.”

Likewise, God has been good to us. And the least that we can do is to take time to be thankful. Even when we don’t have enough, or when things are not going our way, there is always something to be thankful for and God is always worthy of our praise.

Take time to be thankful!
Posted by Rev. Eric Evans at 7:34 AM