Climbing Over a Fence of Fear 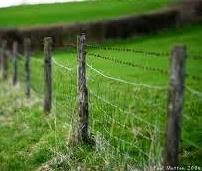 "For I the Lord thy God will hold thy right hand, saying unto thee, Fear not; I will help thee." Isaiah 41:13
_____________________________________
I came along pretty much at the end of a string of generations in my family who worked on the farm. Therefore, I had lots of great experiences that my children will never have, and that makes me a little sad. Like for example, I used to love following my dad around on the land. Sometimes we'd walk around the pasture and through the woods checking the fence to make sure the cows where being kept in or to find a place where they'd gotten out. About half of his land is open pasture and the other half wooded. He had just about all of it fenced in for the cows; some of the fencing much like that in the picture above.

As a little boy, walking the land was like an adventure. We'd walk through pastures, cross over creeks and climb up or down wooded hills. But at some point our excursion would come to a road block, or a fence block I should say. We would get to a place on the land where we would have to cross over a barbed-wire fence. The fence was only about 4' tall, but to a little boy it looked liked 12'. So for me it was practically insurmountable. No matter what was on the other side or what our need was for getting to it, I couldn't cross it. If I had been by myself, I would have had no choice but to cut my adventure short and to head back from whence I had come. But...I wasn't alone. My daddy was with me. So he would cross over the fence first. Then he would reach back over and grab me under my arms and lift me over the fence. Granted, that process of going over was scary becuase I was afraid of that barbed wire. It would have done little more than snagged my clothes or at worse scratched me a bit; but to my little eyes, I thought it would slice me to shreds. But my fear was abated when I remembered that my daddy was strong enough to lift me high enough that it wouldn't even touch me, and it didn't. So we crossed that fence and our adventure continued.

In the 16 years I have been walking with my Heavenly Father, I have found him to be a lot like my daddy, but better. Walking with Him has been an adventure to say the least. It has been exciting to see the places He has taken me and the power and love He has revealed. But as wonderful as it has been, I have had many difficulties along the way . I've had to climb over haters and hurters. I've had to get past problems and pain. I've had to make it over sickness and death. And I couldn't get past any of it without climbing over a fence of fears. Had I  been alone, I could not have made it over. But I am not alone, and I never will be. My Father walks with me, He has climbed every fence ahead of me, and in the times that my courage was not great enough and my faith was not strong enough, He picked me up and carried me over.  Now who wouldn't serve a God like that!?
Posted by Rev. Eric Evans at 6:23 AM