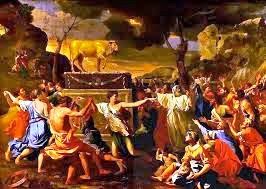 "And all the people brake off the golden earrings which were in their ears, and brought them unto Aaron. And he received them at their hand, and fashioned it with a graving tool, after he had made it a molten calf: and they said, These be thy gods, O Israel, which brought thee up out of the land of Egypt." Exodus 32: 3-4 (NLT)
----------------
Do you know where those gold earrings came from that Israel used to make their golden calf? God gave it to them. Yep, just a few chapters earlier in the book of Exodus, as the children of Israel were being lead out of Egypt, the Lord instructed them to go to all of their Egyptian neighbors and ask them for all of their gold and jewels, jewelry and trinkets. Not to buy it from them or steal it from them, but just to ask them for it. And the Lord touched the Egyptians' hearts, and they just gave it to them. So though they were living as slaves, God's people were on their way to the land He had promised them with great riches to help start their new life.....And look what they did.

While Moses was up on the mountain talking to God, they got tired of waiting and decided to make their own god to worship. And that wasn't long after the Lord had commanded them to have no other God but Him, and to make no graven images to worship. Yet they took that gold and melted it down into a statue of a calf to worship (which was probably something they saw the pagan nations around them do). That's a shame...to allow what was given as a blessing to become their curse. And not just a shame on them, but also a shame on us.

We are all guilty of similar sin. God blesses us with a job, then we end up spending more time focused on that than our families or Him. He blesses us with homes and cars, and we develop pride over those things and turn them into idols. He blesses us with  gifts and talents and we use them for our glory and not His. You get the picture, and the picture is this. If we're not careful, our blessing can become our curse.

So I encourage you to do what I will do myself. Count your blessings, thank God for them, them ask Him to put them and keep them in their proper place in your heart. Then you will not only receive a blessing, but you will be a blessing.
Posted by Rev. Eric Evans at 7:38 AM