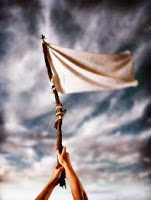 "And he went a little farther, and fell on his face, and prayed, saying, O my Father, if it be possible, let this cup pass from me: nevertheless not as I will, but as thou wilt." Matthew 26:39
___________________________________________
It's funny how some symbols are understood pretty much no matter where you are in the world or what language the people may speak. One of those such signs is that of the white flag.  From as far back in history as the Han dynasty in China, first century AD, it has been the universally accepted symbol of ceasefire and surrender. Even now, there are international rules that make it a war crime to attack or fire upon someone waving the white flag.

You know I'm such a curious person that I just have to know why white? Why not black (which happens to be my favorite color)? Or how about orange? Ok, why not pink? I'm pretty sure I couldn't bring myself to shoot at someone waving a pink flag. Well, as I understand it, white was used for several reasons, most of a practical nature. First of all, in ancient times, if there was cotton or wool or linen cloth, it was probably white if no other color. Dye was expensive and hard to come by. Second of all, white is generally visible against most natural backgrounds. Also, and probably the main reason, all other flags bore the family crest or the national emblem along with the associated colors. To carry those types flags meant that you stood for, and would likely die for, the interests of that family, clan, dynasty, or nation. So then to wave a white flag showed that you gave up all affiliation, allegiance and alliance. In other words, you surrendered.

You like waving your flag don't you? No, I don't mean the American flag. I'm talking about your flag. The flag that says "this is my life, and I own it". The flag bearing your initials and favorite colors which says "I'm grown and I can do what I want to do, when I want to do it". The standard that proclaims "I'm my own man and I make my own plans". Yeaaahhh, that flag! You fly it high for all to see, and dare anyone to even think about taking it down. Yeah, I've been flying that one too. That is until Jesus showed me that I was wrong.

See, Jesus never showed that He had any desires other than to do what God the Father had sent Him here to do. Even when He was a boy, and Mary and Joseph were looking for Him, and found Him teaching in the temple, He said "...I must be about my Father's business". But though there may not have been an ounce of disobedience in Him against God's purpose for His life, we do know that He felt dread for what He knew he faced at the Cross. In fact the bible says that Jesus was so greatly distressed that He went into the Garden of Gethsemane to pray. There He was so overwhelmed by sorrow that His sweat was like drops of blood falling to the ground, and God had to send an angel down to strengthen Him (Luke 22:39-46). So perhaps there was some part of Him who wanted to fly a flag bearing His name and say to God, no, the cross will be too much; let someone else do this; let's find another way!...But He didn't.  Instead, He waved His white flag...He cried out to God "...not as I will, but as thou wilt"....and He surrendered.

Are you still flying your own flag? Still determined that this is your life and you will do with it as you please? Still making decisions for yourself based on what you want, regardless of what God's word says or how His Spirit leads? So was I up until a few years ago. Even after I had accepted Christ as my savior and told the world I was a Christian, I found I was still mostly flying my own flag. I will still living my life, my way. But I realized that as long as I was flying my own flag, all I had to rely on was myself...and that wasn't enough. So you know what I did? I gave up...I gave the symbol that's not only recognized here on earth, but also in heaven...I waved my white flag...I surrendered! And though the results of my submission haven't been as history-making as when Jesus did it in the garden of Gethsemane, it has been the best thing I have ever done. And you know what?; I believe the best is yet to come. My life now is no longer under my authority. I gave up all of my rights in exchange for all of God's benefits. I belong to God now, and I know...He will never fail. And I never knew that until I surrendered all.
Posted by Rev. Eric Evans at 11:55 PM