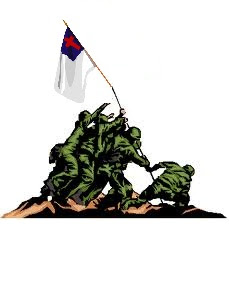 Raise up Your Flag - A Reprise

In April 2009, I published a post titled Raise Up Your Flag! I encourage you to take a few moments to read that. It was and still is helpful for me, particularly in times when it feels like the enemy is coming in like a flood, as described in Isaiah 59.

Recently I have been feeling that way, and the Lord brought me back to that scripture passage. Through it He reminds me that because I am a child of God, the outcome is...
I WIN. I win because Jesus ALREADY WON! No matter how the battle looks right now...no matter how, through my eyes, it looks like the enemy is gaining ground....the outcome has already been decided.

The scripture here in Isaiah 59:19 says When the enemy comes in like a flood, the Spirit of the Lord shall lift up a standard against him. A standard as referred to here is a flag that bares the mark or emblem of the kingdom which it represents. As I am sure you have seen in movies, during a battle, it is important to proclaim victory by taking the flag of that nation and posting it high on a hill for all to see. That lets the defeated nation know that what used to belong to them, belongs to them no more. It also lets any others who have desires to possess that land know who it is they will have to fight to get it.

When you surrendered to Christ, and I hope you have, you became His conquered territory and forever part of His kingdom. That cross-shaped flag that now stands at the top of the highest hill of your soul lets everyone and everything that used to lay claim to you know that it doesn't any more. It lets every enemy know, whether a demon from hell or your flesh in which you still live, that to get you its going to have to fight for you. And Jesus is no push-over. Our God boldly proclaims "No weapon that is formed against thee shall prosper; and every tongue that shall rise against thee in judgment thou shalt condemn. This is the heritage of the servants of the LORD, and their righteousness is of me, saith the LORD." Isa. 54:17

So if you feel like it has been a struggle for you lately to raise your flag as I have, don't worry. Christ has already raised it for you.