Messing up a Clean Slate 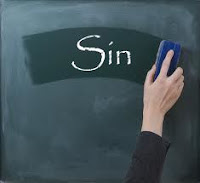 The story of Noah and his Arc needs little introduction. Most of you are familiar with the Bible's description of how sinful the world had become and how it displeased God. I'm sure you know that God called Noah to build this gigantic ship when there is no evidence that he had ever built as much as a canoe; how he gathered the animals and marched them in two-by-two; how the rains came, and the waters rose and for 40 days and 40 nights and the whole earth was covered in that flood with everything destroyed except for what was on Noah's boat. It was God's way of wiping the slate clean and starting over.

Some of you may not be familiar with what happened next. Well, the Bible says that Noah started over and became a farmer. He planted a vineyard....grew grapes...turned them into wine...drank the wine....and GOT DRUNK. In fact, so drunk that he laid naked in shame in his tent. His sons had to come in and cover him up. WHAT?!? But wait a minute. The Lord just had him to take anywhere from 20 to 40 years to build a boat to survive a flood that God sent because of the sin in the world; and Noah was chosen because he was "a just man". The Lord had started over...He had wiped the slate clean...and now there was Noah messing it up again.

You know, when I think about it, I really shouldn't be too surprised. Truthfully I can see some of me in that story. I have messed up, I mean way up; beyond the point of what I could fix. But then God, in His gracious and merciful way, wiped my slate clean and gave me another chance. Then, in my sinful and selfish way, went and messed up again.

If you see yourself in this story too, I want to share a truth with you that I have to remind myself of. Here it is....There is nothing you can do to separate yourself from the love of God! (Romans 8:38,39) No matter how high your sins stack up, they will never reach the heights of God's love for you.The sum of the times you have messed up again will never be equal to or greater than the number of times that God has thought about how much He loves you.

So if you feel like you have already messed up your clean slate, just remember God still loves you and if you repent [stop doing that sin] and ask Him for forgiveness, He will wipe it clean again.