Running From a Monster of Your Own Making 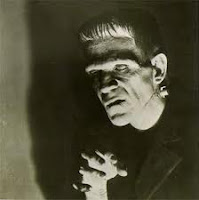 Genesis 32:24 " And Jacob was left alone; and there wrestled a man with him until the breaking of the day."

When I read about Jacob, I am reminded of the tale of Frankenstein. As the story goes, Dr. Victor Frankenstein became fascinated with finding a way to create life after the death of his mother. He took various body parts and pieced them together to create a being from his own bare hands. Once alive, Dr. Frankenstein was disgusted at his creation because of its monstrous appearance. So he locks the monster away. The monster grows saddened at his confinement and longs to be set free. Finally he is able to escape, and eventually grows angry at his creator and pursues him that he may kill him. How ironic it was that Dr. Frankenstein was running from a monster of his own making.

Jacob found himself in that same predicament. He had stolen his brother Esau's birthright, which angered him so much that he vowed to kill him. So Jacob ran for his life.

Sometimes we find ourselves in trials and tribulations that are not our fault. But many times, if the truth be told, the troubles we are desperately trying to flee are the results of sins we have committed. Poor decisions, bad relationships, or wrong turns. Things that at the time seemed harmless enough, but now have grown into monsters that seek to destroy us.

Here are 3 things we can learn from Jacob:

1) God will make you stop running.  God touched the hallow of Jacob's thigh, and he had no choice to but to stop running. Sometimes we think if we can avoid our monster long enough, eventually it will go away. But it won't! You can't defeat a monster while running from it.
2) God will change you. God changed Jacob's name (meaning trickster) to Israel (Prince with God). We often pray that God will change our situation, but He is more interested in changing us. If He defeated our monster without changing us, there is a chance we only make more monsters.
3) God will change your monster. In Genesis 33:4, Esau didn't do what we would have expected when he finally caught up with Jacob. The bible says that he ran up to him, embraced his brother, and they wept. See, if we first let God change us, He will then be gracious enough to change our monster.

Let Jacob and Dr. Frankenstein be an example to you. You can never run fast or far enough. Surrender to the Lord, and you too can stop running from a monster of your own making.